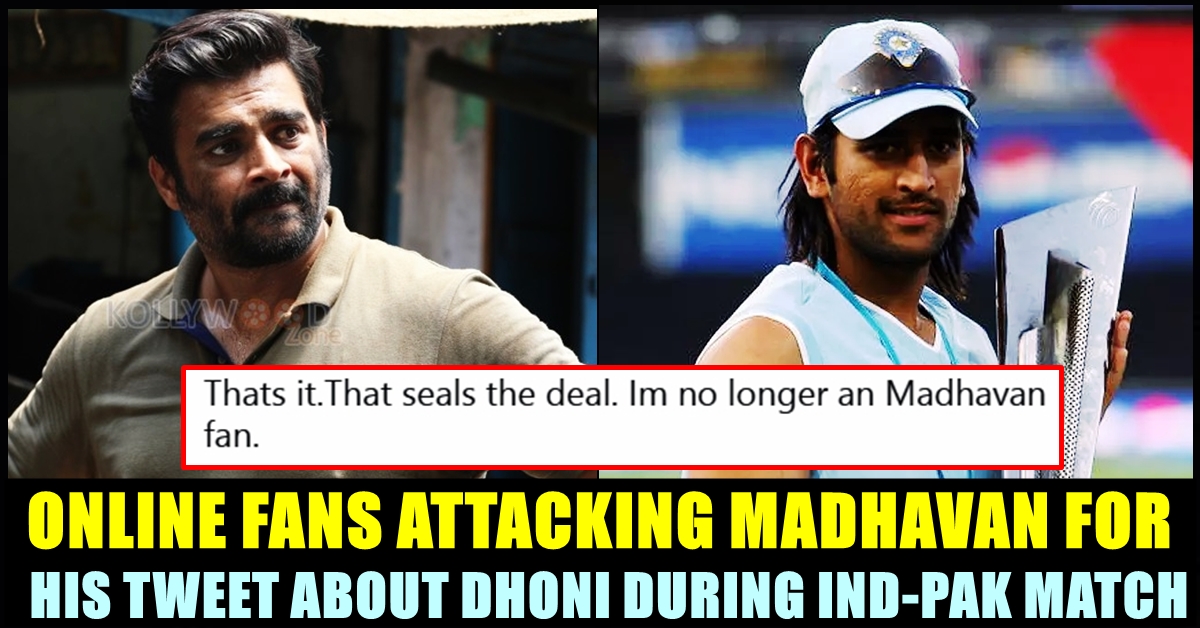 ;Pan Indian actor Ranganathan Madhavan uploaded a tweet about missing former Indian Captain Mahendra Singh Dhoni during the match that took place between India and Pakistan on Sunday evening. On seeing the match going one side favouring Pakistan right from the start, Madhavan asked his twitter followers whether he is the only one who misses Mahendra Singh Dhoni at that moment. His tweet garnered wide reach with thousands of reactions. Many haters of Dhoni attacked him through the comment section of his tweet and asked him to support the current time. Fans who felt the same, supported the “3 idiots” actor’s tweet as well.

Shaheed Afridi picked three main wickets of India which includes Rohit Sharma, Virat Kohli and KL Rahul. Pakistan openers Mohammed Rizwan and Babar Azam effortlessly chased the score down with 11 balls spare. Pakistan won India without losing a single wicket and broke the streak of 12-0 and made it as 12-1 as far as the world cup face offs of both the teams concerned.

Ever since Rohit Sharma got out in the first over bowled by Shaheen Afridi, team India never got into the game and it is undeniable that the team outplayed India in every department. Many celebrities reacted to India’s performance and actor Ranganathan Madhavan came up with a tweet asking his followers whether they are also missing Mahendra Singh Dhoni like himself. “Am I the only one REALLY MISSING @msdhoni RIGHT NOW ???” Maddy said by adding wink emojis.

Am I the only one REALLY MISSING @msdhoni RIGHT NOW ???😉😉😉

The tweet garnered 70k plus likes in no time with thousands of people reacting to it. “Thats it. That seals the deal. Im no longer an Madhavan fan”, a follower said to disagree with Madhavan’s said whereas another one wrote “No one ! Sit and support for the present team”. Tweets suppporting Maddy’s tweet also surfaced in the comment section of his tweet.

I thought he is the Mentor? Unwanted Hype of Dhoni.. Even before Dhoni entry India always won against Pakistan in WCs https://t.co/46yAbD3UA9

This guy was so likable before he had social media https://t.co/0bDCLJsp2w

Sit and support for the present team

We miss @virendersehwag and @GautamGambhir the openers who smashed Pak everytime

After the end of the match, Maddy came up with a tweet writing “Having said that both the teams played a near perfect innings. No major midfields, no dropped catches, no super close calls. Apart from a spectacular Pakastini innings the game of cricket won too. Good to see the teams huge respect for each other at the end of the game” to express his opinion about the whole match.

Having said that both the teams played a near perfect innings. No major midfields, no dropped catches, no super close calls. Apart from a spectacular Pakastini innings the game of cricket won too. Good to see the teams huge respect for each other at the end of the game.