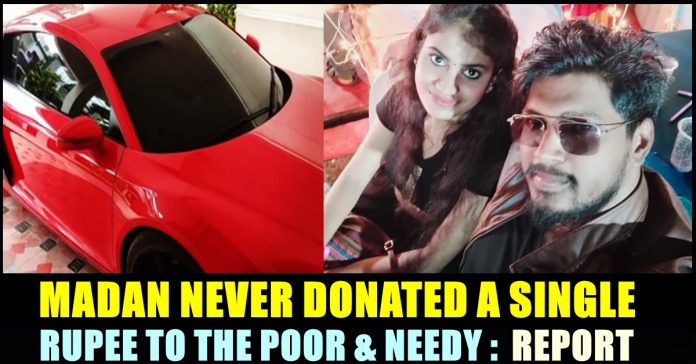 Despite of the complaints and accusations that were emerged against Madan aka “Toxic” Madan, his supporters defended him saying that he has a heart to help people and slammed people who criticized him in social media platforms. Now, a recent report of Polimer channel said that Madan never donated a single rupee to any one and invested the income he gained through his youtube channels in Share market and Bitcoin. The channel said that the youtuber who boasted himself as a generous individual to his subscribers, cheated them by staging fake donations.

When Madan’s lawyer approached high court seeking anticipatory bail, Judge who heard the case said “Argue after hearing his audio grabs” to the Lawyer who sought anticipatory bail for “Toxic” Madan. Police officials have expressed strong disagreement with the court issuing bail for Madan, says the recent report. According to reports, when the lawyer stated that it was the complaint made by the Judge said that the talks of Madan are intolerable to hear and asked Madan’s lawyer to argue after hearing them.

Now, a report of Polimer emerged saying that Madan never did donation to poor and needy. It is reported that Kirthika is an ardent PUBG lover and fell in love with Madan while playing games online. They started living together in Salem and has a 8 month old baby. Report of the news channel said that Madan cheated his followers in the pretext of helping poor patients and made them pay money through Pay TM and Google pay. It is revealed that they haven’t helped poor and needy as they promised to their subscribers.

Instead, Madan has paid people to laud him in live chats in front of his subscribers. Madan’s wife arranged young women to talk to him in live to attract more subscribers, the report said. Police have found crores of money in the bank accounts of Krithika and Madan. They also have reported about the three Audi cars the couple bought with their earnings from youtube followers. Actions to restrict the bank accounts of the duo has been initiated. Krithika and Madan’s father Manickam has been arrested by the Police and the search to nab Madan has been intesified.