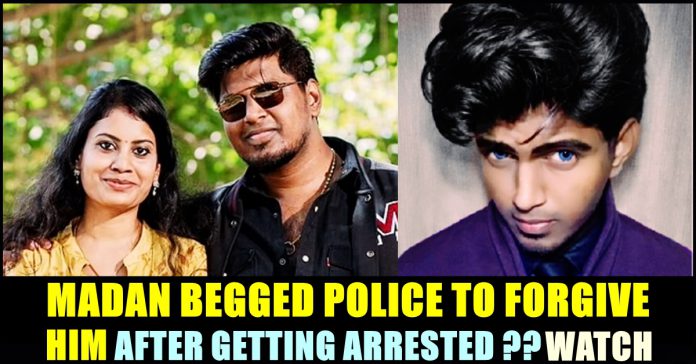 Reports emerged saying that Madan of PUBG fame begged police to forgive him while getting arrested at Dharmapuri. Earlier, Madan, through his youtube channel, said that these kind of legal cases wouldn’t affect him and said that his leading, expensive lawyers will take care of all the issues. Now, while getting arrested, Madan begged police to leave him alone, said the Police officials.

“When the players of PUBG searched for PUBG related videos to win certain challenges, Madan’s videos popped up in large number as he had uploaded so many videos. Followers started increasing for Madan and Krithika got introduced to Madan through his social media handles. They became friends with the connection of their native Salem and turned lovers after few months. The duo eloped after facing problems with their parents accepting their relationship. ” he further added.

“Their lifestyle changed after getting crores of donations from the subscribers of their channels, according to Vikatan. Madan used the bank account of Krithika and currently her account contains Rs. 4 crore of money” the official said. It is reported that most of the revenue they generated came from the donors comparing to the youtube income. He reportedly cheated his subscribers saying that he is going to help the poor and needy.

Police found that Madan provided money to the people who lauded him during live streaming. Madan has confessed about his crimes and revealed some names, says the recent report of Vikatan. “Audi Car, iPad, Tablet were confiscated from Madan. His asset value is being investigated” the police official added. Madan fell on the feet of Police officials and begged them to forgive him for manipulating children by using obscene language when Police entered his relative’s house in Dharmapuri.

More than 160 complaints were made against Madan so far from across the state. He was also involved in cheating money from his subscribers. Based on the confessions of Krithika, Police are planning to interrogate Madan, says report. Madan didn’t reveal his identity through his youtube/Instagram accounts and Police got the pictures of Madan from his wife’s mobile. Photos of the accused released in Internet for the first time after the arrest of Krithika.