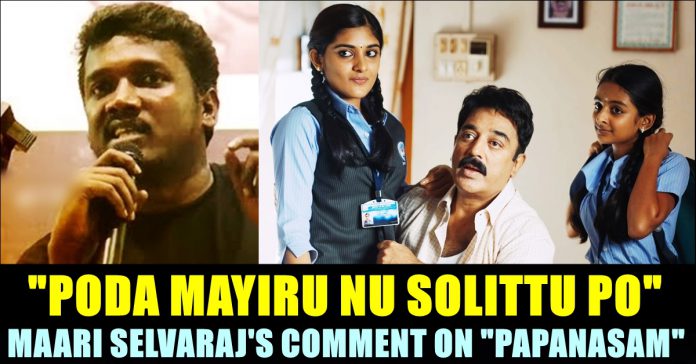 Maari Selvaraj who impressed Tamil cinema audience with his debut film “Pariyerum Perumaal”, made a comment on Kamal Haasan’s blockbuster film “Papanasam” while interacting with public about how fear plays an important role in oppressing women in our society. Though the filmmaker’s perception was received well by the listeners, many people disagreed with the example he made and his comment on veteran actor Kamal Haasan.

“In districts like Coimbatore and Pollachi, they grabbed the cell phone from their daughters. Many girls forced to put full stop to their studies. Your father and mother will change in a second. You yourself will change in a second due to fear. We are living in that sort of a dangerous world” Maari Selvaraj can be seen interacting with public in an event.

Further, the filmmaker went on to talk about the 2015 blockbuster film “Papanasam” which is a remake of Malayalam film “Drishyam”. “A film named “Papanasam” became a huge hit among Tamil society. But the father would never say to his daughter that she doesn’t need to be ashamed of anything. He would never say to his girl that the guy who shot the video should feel ashamed. He will save his daughter in the climax and I don’t know what he would if other guy commits the same crime.” Maari said who further mentioned the name of actor Kamal Haasan who is considered as a legend in Tamil film industry.

“I don’t know whether the father would keep saving his daughter. But the film became a huge hit in our state. It is because the fear of parents is the investment in our state. A legendary hero like Kamal Haasan would teach his daughter to pretend in front of police officers to save her but would never teach her to shoo away such miscreants without fear. These kind of films led to crimes that happened in Pollachi” Maari said.

“If the first girl warned him in an appropriate way, 250 plus girls would have been saved. Think of what kind of society we are living in if the guy who shot the video is not getting afraid of anything” said the filmmaker..

Though the perception of the filmmaker got appreciated by enormous number of Internet using citizens, many disagreed with the example he provided. They claimed “Papanasam” as a crime thriller and a remake film from another language. They also felt that he should have used the name of the character instead of dragging Kamal Haasan. A fan of the actor said that Kamal is someone who made a film called “Mahanathi” in 1994 where he would ask his daughter to lead a successful life after the trauma she went through in a prostitution centre.

Many questioned Maari whether he watched the film “Papanasam” as well. “The father would come to know about the incident only after the murder. He would console his daughter and would save her from the Police.” said a Twitter user on seeing the video.

This is ridiculous. Poda mayurunu solliduma nu sollirukalam. But its too late. There is a body in his backyard. And the rest of the film shows how a father saves his family from not getting charged for murder. Kamal comes into the picture only after the perpetrator dies.

See, first of all the film was not made to convey the message that mari selvaraj mentioned in this video. The film is a mystery thriller that demanded it's own screenplay. No scene in the film supports the actions of the antagonist. We can't expect every film to deliver a message

However, people should not fade the message conveyed by Maari Selvaraj in his speech. The way he advised girls to handle harassments such as blackmail, threatening etc, needs to be welcomed. A girl who is subjected to blackmail must not fear and should realize that the criminal is the one who needs to be ashamed of his behaviour.

Mirchi Shiva Openly Trolls All The Music Directors Of Tamil Cinema In His Very Own Style !! : HILARIOUS !!

Santhanam, a comedian turned hero was loved by most of the Tamil cinema fans since his initial stage where he did lead role in...