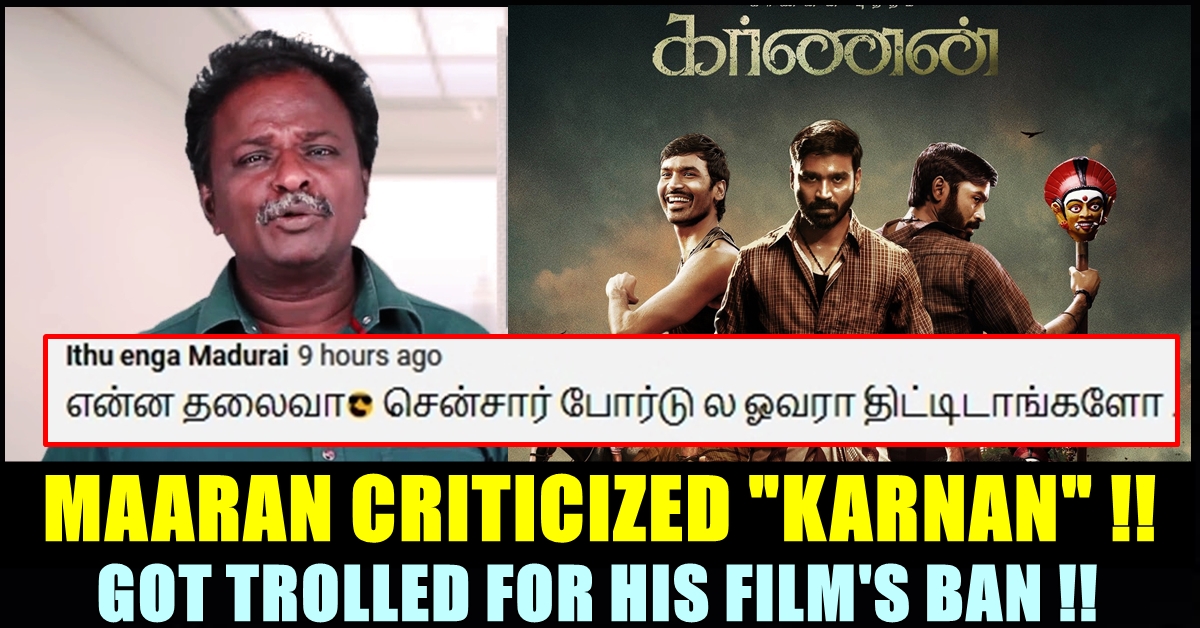 “Blue Satta” Maaran who celebrated Mari Selvaraj’s debut film “Pariyerum Perumaal”, criticized his second film saying that it didn’t meet the expectations. He said that the character of the antagonist and the cause behind the rift between himself and protagonist is vague. However, people after watching his review, trolled him based o the ban his film received from censor board.

The most awaited film of Dhanush and Mari Selvaraj’s “Karnan” released in the theatres on Friday and left the fans of Tamil cinema talking about it. Bankrolled by Kalaipuli S. Dhanu, the film’s music was composed by Santhosh Narayanan and the camera, edit works were done by Theni Eashwar and Selva RK respectively. “Natti” aka Natarajan, Yogi Babu, Lal, Rajisha Vijayan, Gouri G Kishan, Lakshmi Priya and others played prominent supporting roles in the film with Dhanush playing the titular character.

The film’s plot revolves around a fearless youngster fighting against the influential people who are oppressing his people through various ways. The period film which is set in the suburbs of Tirunelveli district, talks about the struggles faced by the people who belong to a small village named “Podiyankulam”. One of the main problems which acts as a barrier for the growth of “Podiyankulam” residents is the absence of government buses and a bus stop. It is reported that the film is made based on the Manjolai riots of 1999 and 1997 Melavalavu massacre.

“Blue Satta” Maaran, reviewing the film, said that the film had major expectations among the fans and gave a huge opening box office wise. “Though the film didn’t fulfill the expectations it caused. “A film should have a huge conflict or a powerful villain. “Karnan” lacked both.” he said in his review.

“In “Pariyerum Perumaal”, an elderly man would have played the “villain” character and will scare us whenever he appears in the film. “Karnan” failed to have such villain. Apart from that, the problems addressed in films like “Asuran”, “Pariyerum Perumal” continues to take place till today but the transport problem in “Karnan” doesn’t exists today which didn’t connect with the audience” he said.

“The film didn’t give a clear vision about the rift between “Karnan” and “Kannapiraan”. We didn’t expect such cinematic climax from Mari Selvaraj. Many of the metaphors couldn’t be understood and the song placement of “Kandaa Vara sollunga”, “Utratheenga Yeppov” we disappointing.” Maaran said.

Maaran also clarified about his own film Anti Indian’s status in his review. Most of the people who watched his review, started trolling him based on his clarification. “Do you understood now, how hard it is to release a film ??” asked a online user whereas another one trolled him saying “I have seen censor chopping four scenes from a film. For the first time I am seeing a whole film getting banned”