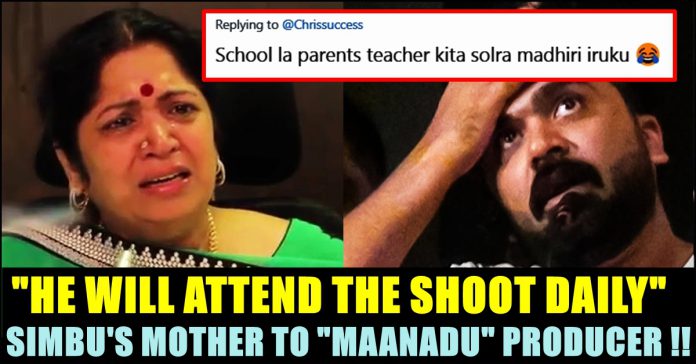 “Maanadu”, Simbu’s one of the many shelved projects is resuming again, according to sources. Being one of the most controversial actors of Kollywood, Simbu walked out of several projects in mid way due to unknown reasons. The actor who was last seen in “Vantha Raja va Thaan Varuven” which was released earlier this year, is yet to complete his next film.

Not many days ago, fans of Silambarasan aka STR got dejected due to the heart breaking news of their most awaited film “Maanadu” getting dropped. Simbu aka STR aka Silambarasan who is known for films like Manmadhan, Vallavan, Vinnai Thaandi Varuvaya enjoys a huge fan base for his acting skills and for his public speeches.

“I couldn’t avoid dropping the movie as it getting delayed for a long time. My love and friendship with Simbu will continue. Thanks to his fans and media friends for supporting me all these days.” said Suresh Kamatchi, the producer of Maanadu during the drop.

Now, recent reports said that the talks between concerned authorities regarding the movie going on floors has been made. In the discussion of Producers council which had both Suresh Kamatchi and Usha T Rajendar, Simbu’s non-cooperation for the shoot of “Maanadu” was discussed. Usha T rajendar, mother of actor Simbu, has promised to the production that her son will attend the shoot regularly hereafter. She also promised that he will be present in daily manner from morning 10 AM to 6 PM.

Following a producers council discussion reg STR's 0 cooperation for shooting, which also had presence of UshaTRajendar & SureshKamatchi, it has been promised tat she'll make sure her son attends shooting regularly, & will shoot everyday between 10AM & 6 PM.

After committing “Maanadu”, Simbu has attended shoot of the 50th movie of Hansika, his former girlfriend. The shooting spot pictures of Simbu with Gautham Karthik were also released which is a movie produced by Gnanavel Raja. It was said to be a remake of Kannada remake “Mufti”. However, it was also dropped by the makers of it due to Simbu’s absence.

Days after the news of Maanadu’s drop announced, Simbu announced through his manager that he is going to make his own movie “Maghamaanadu” under his banner with 125 crores budget. After that the actor went to “Thailand” and returned from there recently.

As soon as the news of “Maanadu” being resumed surfaced, Internet can’t stop reacting. Check out some of the reactions below :

Imagine being 30+ and your mom is busting you after complaints that you ain’t showing up to work. https://t.co/31s9usLg3Q

Every PTA meeting in school https://t.co/pgUCEi38uq

When everything goes wrong in school and principal has the biggest weapon in hand.

A.R Murugadoss has appeared in an interview regarding the promotion of his upcoming film Darbar. Sharing many incidents that took place during the making...

Heart wrenching video of a Kabaddi player succumbing to death during his ride has left the people of the surrounding devastated. The video shows...