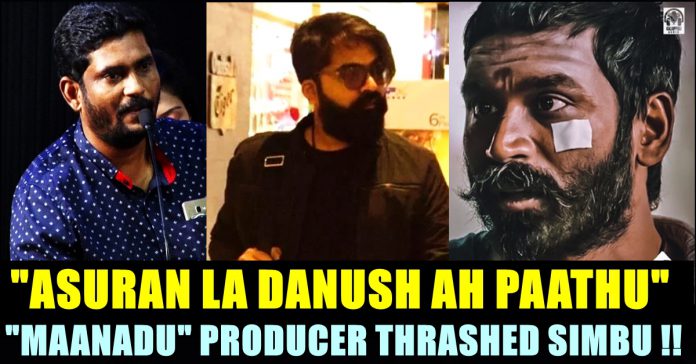 The actor who was last seen in “Vantha Raajava Thaan Varuven” by Sundar C as protagonist, has attended shoot of the 50th movie of Hansika, his former girlfriend. There were shooting spot pictures of Simbu with gautham Karthik were also released which is a movie produced by Gnanavel Raja. It was said to be a remake of Kannada remake “Mufti”. However, it was also dropped by the makers of it due to Simbu’s absence.

Now as Simbu returned from abroad, Suresh kamatchi has approached him to resume “Maanadu” it seems. But the actor’s mind is still in the same state according to Suresh Kamatchi. In this recent interview with Nakheeran Studio, Suresh kamatchi has revealed many things about the issues he faced in” Maanadu”.

“I denied initially when Simbu approached me to produce the film. I said that no one will provide finance to me as I am a small time producer. But under Simbu’s compulsion, I managed to get a financier who believed me. When everything was set, Simbu started getting off the project slowly. His statements would vary in daily manner. Though I waited for a long time, at one point I was forced to save my financier who invested money in me.” said Suresh in the interview.

Watch the interview from 12th minute :

Followed by that Suresh Kamatchi even said that STR is keeping his fans engaged with a single photo. I talked with him after he came from Thailand. But I don’t believe that he has changed. I asked him the advance I gave him for “Manadu” back. I still wish STR to come back as a good artist. While watching “Asuran”, an young actor like Danush makes me clap for him without my knowledge. I got angry on Simbu at that time for wasting his talent” said Suresh in the interview.

Comment your views on this interview of Suresh kamatchi !!

Anjana Rangan, popular video jockey who is known for hosting shows and reality programs in Television, recently conducted a question and answer session with...

A video that shows a college student trying to pose for a picture with actress Aparna by putting his arms around her shoulder without...