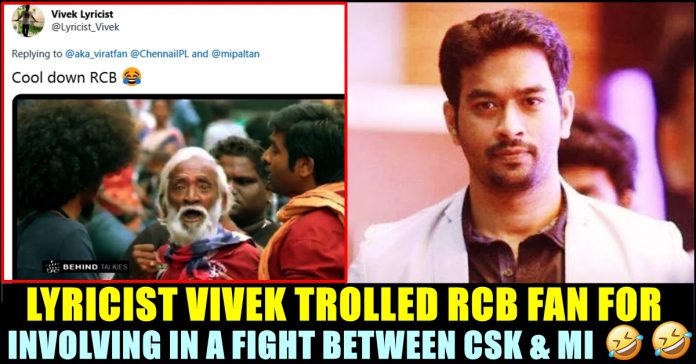 After replying to the official Twitter account of Mumbai Indians for using his song “Verithanam Varithanam” for one of their videos, Vivek Lyricist received various kind of reactions from his followers and Twitter users. One of a twitter user named as “Aravind” who claimed himself as a die hard fan of Virat Kohli through his bio, mocked Vivek for his reply to Mumbai Indians. In reply, the lyric writer trolled back the fan by mentioning his idol’s RCB team which initiated a war between the fans of the three IPL teams, Mumbai, CSK and Bangalore.

The most awaited IPL tournament is all set to get inaugurated in less than 20 days amidst the COVID 19 crisis. Almost all the players of every team have reached UAE and are self quarantined to participate in the tournament. As all the preparations are being made in full swing by the management, Twitter banter between IPL teams also started taking place to keep the fans engaged.

The defending champions Mumbai Indians, on 2nd September uploaded a video in their official twitter account, highlighting the special moments of their team from last year IPL season. The video showed the perfect yorkers of Malinga, Rohit Sharma’s effortless batting ability and also their fielding excellence. The song they used for the video compilation is A.R Rahman’s recent chartbuster “Verithanam, Verithanam” from Tamil movie “Bigil” directed by Atlee. The song was sung by our very own “Thalapathy” and Tamil based twitter users got surprised on seeing a MI using the song for one of their videos.

Along with the fans and the official twitter handle of Chennai Super Kings, Lyricist Vivekh who penned lyrics for the song “Verithanam” said that he won’t give his song to a team which doesn’t have Sachin Ramesh Tendulkar. He also requested CSK to do a “Marana” edit as reply to MI’s video.

Twitter user Aravind who is having a display picture of Virat Kohli in Red jersey, said that Vivek is playing an intellectual. “அப்படியே இன்டலெக்சுவல்லா பேசுவதா நினைப்பது” his comment read.

Vivekh immediately replied to the tweet by adding a meme template from the film “Naanum Rowdy Thaan” to troll the fan and his team. He added a caption saying “Cool down RCB” with laughing emoji.

This tweet from Vivek triggered the fans of Mumbai Indians, Chennai Super Kings and Royal challengers Bangalore to involve in verbal spat with each other. Some even threatened the Lyric writer with abusive worlds.

Reacting to the ruckus, Vivek posted a clarification tweet saying that it is a tweet posted for fun. He believed that those fans will come out of social media life and to start accepting things. He asked them not to judge others. To those who threatened him with bad words, the lyricist gave a laugh as reply.

Oru jolly tweet ku yen pa ungalukulla adichikureenga. Hopefully U all will come to a stage in life, when U start accepting things, appreciate the little little fun involved in life, n stop judging people at large. Love You ALL .

Comment your views on fans involving in verbal spat with each other in social media !!

Previous article“She Is Exposing Her Body For Money” -News Portal !! “Super Singer” Pragathi Responded
Next article“I Never Said It” Arjun Das Opens On This Viral Audio For The First Time !!

Acclaimed cinematographer-director-ad filmmaker Rajiv Menon returns to direction after 18 years with Sarvam Thaala Mayam — a story that revolves around the life of...