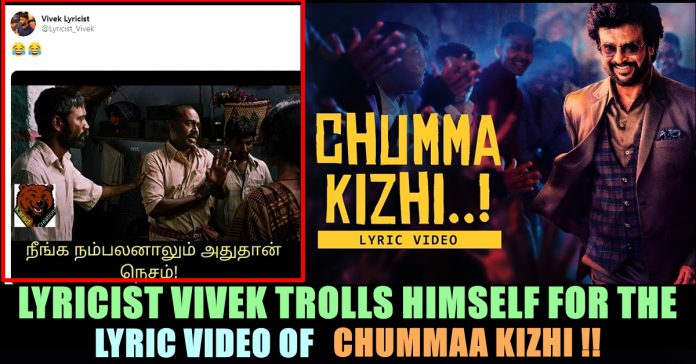 The first single of most awaited movie of 2020, “Chumma Kizhi” has released only to go viral across the Internet. Unlike the other singles of Superstar Rajinikanth’s previous movies, the lead actor himself appears in the single and we can see him lending his voice for the song at the end.

At the end we can also happened to witness Rajinikanth himself saying that the song is going to be celebrated in theatres in big time. As he told the song which was written by Lyricist Vivek and composed by Anirudh Ravichander rocking the Internet with various reactions.

The song which would most probably be the opening song of the film, has the lyrics in a way of celebrating the Superstar. Sung by SPB, it indeed gives the feel of nostalgia to the fans of Superstar who are following him since very long time. The visuals of the 4 minute lyric video also contains few glimpses of the actor shaking his leg for this peppy number.

Many appreciating Lyricist Vivek for penning the song in a terrific way of celebrating Superstar. Apart from writing the lyrics, Vivek also lent his voice in the chorus along with music director Anirudh. The lyricist is very much known for interacting with his followers in social media platforms. Having around 5 lakh followers, Vivek is one of the many celebrities who are very much active in social media.

After seeing him in the lyrics video, one of his follower, in a humorous way said that the lyricist is pretending like singing. He wrote “song la unga reaction, group la dupe maathiri irukku😜😜” and mentioned the lyricist which grabbed his attention.

To this tweet, Vivek immediately replied with a trending meme template which tickled the laughing bones of his followers. He posted the meme template from the recent blockbuster “Asuran” to accept that he is indeed a “dupe” in that group.

This tweet from Vivek made his followers to laugh which is evident through the reply tweets. Check out some of them below :

Comment your views on this reply given by Vivek !!

Previous articleSJ Surya’s Open Challenge During Kushi !! WATCH !!
Next articleVijay Devarakonda Slammed People Who Are Trolling Him Regarding Parvathi Issue !!

Reacting to the speculations that surfaced saying Indian spinner Yuzvendra Chahal and his wife Dhanashree Verma are going to get divorced, the cricketer himself...