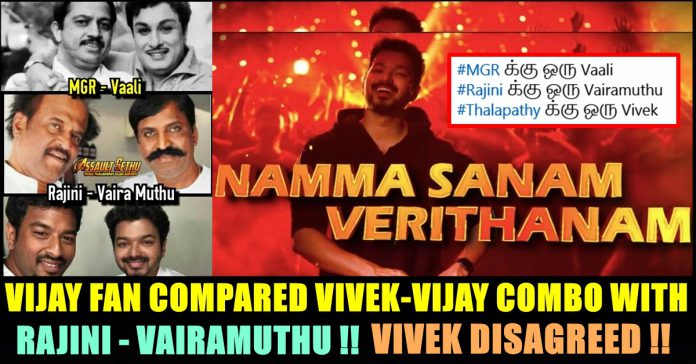 Lyricist Vivek Not Agreed With This Comparison Of Vijay Fan For This Reason !! CHECK Why !!

One of the highly anticipated films of the year is Atlee directorial Bigil. The sports drama will see Thalapathy Vijay in dual avatar. The promos of the film have already generated immense hype and curiosity amongst fans. But if there is one aspect of the film that has left all the Thalapathy fans in a state of frenzy is that fact that he will also be lending his voice to a song title Verithanam. Moreover, the song is composed by AR Rahman, the legendary two times Academy Award winning music composer.

Ever since Vijay and AR Rahman’s collaboration as a singer and music composer was announced, fans have been waiting for the song with bated breath. And finally, the makers revealed the release date of the song and along with the release date, a teaser video was also dropped to tease the fans further.

As soon as the single released, Fans of the actor couldn’t keep calm as they made an record of posting more than 1 million tweets in twitter. On the other hand celebrities also, for their part expressed their excitement through their tweets.

Now few fans who are very much excited, compared lyricist vivek and actor Vijay’s combination with legendary combos such as MGR and Vaali, Rajinikanth and Vairamuthu.

On seeing this post, Vivek disagreed politely and said “Huge honour 🙏 But i humbly disagree. They r legends and they did it for years. I m just starting out 😃”

Huge honour 🙏 But i humbly disagree. They r legends and they did it for years. I m just starting out 😃

Earlier, the track Singapenney from Bigil was released and the entire team dedicated the song to women. The motivational song turned out to be a major hit among netizens as it speaks highly of the struggles of and sacrifices by women.

Bigil, directed by Atlee, is a sports drama on women’s football. Vijay will be seen in two roles, that of a father and a son in the commercial entertainer. Produced by AGS Entertainment, the film also stars Nayanthara, Jackie Shroff, Kathir, Yogi Babu, Indhuja Ravichandran, Varsha Bollamma and several other actors.

Mia Khalifa Shared This UNSEEN “Embarrassing” Picture Of Her To Celebrate 13 Million Followers In Instagram !!

Drinking alcohol, especially too much, can be accompanied by various side effects. A hangover is the most common one, with symptoms including fatigue, headache,...

For the past couple of days, a number of videos of people worshipping a woman named "Annapoorani" who is dressed like a goddess are...