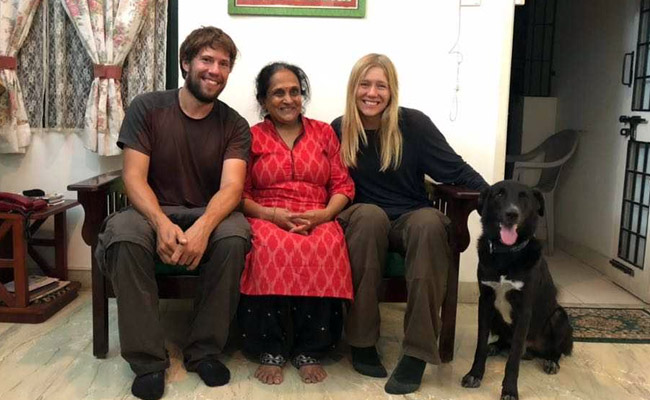 German couple Janin Scharrenberg and Steffen Kagerah, who are on a world tour, flew  all the way down to Chennai from Nepal  to reunite with their two years old black pupper  which went missing during July of this year.

The couple who were camping near the Marina beach as a part of their world tour, were parted away from their pet. The couple then lodged a complaint in the Marina beach Police station. Trespassers said that, the puppy was allegedly taken by an auto rikshaw driver. ”At  4.30 p.m. on Saturday, Steffen had gone to the harbour to enquire about  shipping our car to Sri Lanka, our next stop. I was waiting on the Marina beach for my husband. Since the car was getting too hot in the sun, Luke was tied to the vehicle and was sitting under it and I was inside the vehicle for a few minutes. A few people who saw an auto rikshaw  driver remove  Luke’s leash and drive away with him, alerted me, but by  then , it was too late.” Said Mrs. Janin. The couple had initially decided  to do a tour of Europe but then visited Turkey and decided to go to more places. “After visiting Pakistan, we came to India and travelled from Amritsar all the way to Rameswaram while driving along the west coast,” She added. The couple had announced a reward or any information about the missing Labrador. Few days later, Vijaya Narayanan, an animal rescuer, received a call from a youngster , saying  that the missing puppy was identified. The embedded microchip confirmed that the Labrador was Luke.

The young man was awarded Rs. 30,000. Vijaya accompanied the couple as they were reunited with Luke. She added, “It was love in its purest form. The unfairness of their separation troubled me. I’m relieved. I can sleep peacefully now.” On her Facebook page Janin said, “The happiest day of my life! Thanks to everyone who has been helping us. U are amazing. Thank u for every picture.”

Previous articleKamal Has A Big Surprise For Us On His Birthday, Indeed A Great News!
Next articleHere Is A List Of 100 Countries Whose Petrol Prices Will Shock You.. Way Lower Than India!!

Who Is Going To Play The Female Lead In Legend Saravana’s Debut ??

Chennai Police are giving their everything to make people stay home. Few days ago, we saw a traffic police shedding tears while requesting people...