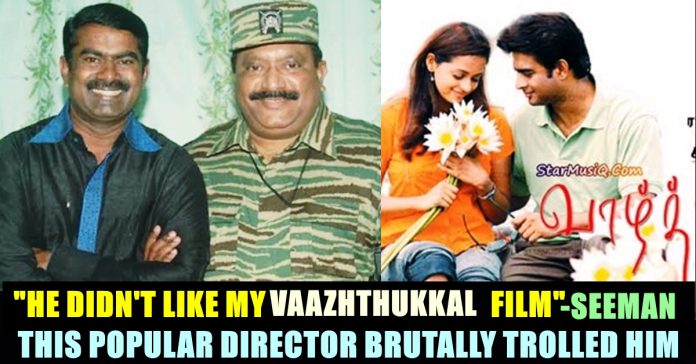 Thiruvenkadam Velupillai Prabhakaran is the founder and leader of the Liberation Tigers of Tamil Eelam (the LTTE or the Tamil Tigers), a militant organization that sought to create an independent Tamil state in the north and east of Sri Lanka. Actor, Director and Political party leader Seeman who always identified himself as an ardent follower of the leader, in a recent youtube interaction, has revealed that the LTTE leader didn’t like his film “Vaazhthukkal” and wanted him to make more movies like “Thambi”.

“When my film “Vaazhthukkal” got flopped, Sri lanka based magazines wrote reviews criticizing it severely. You know he will read all the magazines, you know that well” Seeman said to the person who was interviewing. “He asked people around him whether I was feeling sad and they said I am not caring about it much” the “Naam Tamizhar” leader continued.

“Why do we need flowers and poems ?’ he (Leader Prabhakaran) asked me.” Seeman says in the interview. “He must have inquired about my film “Vaazhthukkal” to the people around him and came to know that I have made a film based on Love.” he added.

“Love is a seasonal emotion. Every one of them must have felt it. Tamizh people lack dignity and bravery. We should make films that teaches them, right ? Why do we need these kind of films ?’ Leader Prabhakaran said to Seeman according to the video that is doing rounds in social media platforms.

In the video, Seeman, further goes on to say that the LTTE leader liked his film “Thambi”. ‘you should make films like “Thambi”. That’s how we get our freedom’ he said to me and I realized that someone had informed him about all these” Seeman could be seen laughing in the video.

On seeing this video, director John Mahendran, son of veteran filmmaker Mahendran trolled Seeman by writing “ஷபா முடியல….” in a way of saying that he couldn’t tolerate the lies of “Naam Tamizhar” leader Seeman. John mahendran is known for director actor Vijay in his romantic film “Sachien”.

Check out the full interaction below :

“Vaazhthukkal” and “Thambi” which had actor Madhavan in the lead role, released on 14 January 2008 and 22 February 2006. Seeman began his career as a filmmaker in the mid-1990s, working on films such as Panchalankurichi and Veeranadai. The failure of his early films made it difficult for him to attract offers as a director and several of his proposed projects were stalled in the late 1990s. He later made a comeback through the successful vigilante film Thambi. He also acted in a number of films as a supporting actor.

Previous articleBIGG BOSS Julie Replied To Trolls & Criticisms !!
Next articleAnitha Replied To Follower Who Asked Her Not To Mingle With “Anbu” Gang !!

“Don’t Wear This, You Will Look Short” – People Advised !! Here’s How DD Handled Them

Anchor Dhivya Dharshini who is popularly known as DD among the television audience, on Monday, came up with a post in her official Instagram...