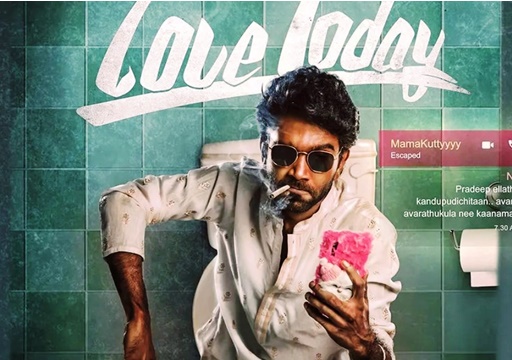 Followed by “Don” and “Kantara”, “Love Today” joined the list of movies which became a blockbuster during it’s theatrical run but didn’t go well among the OTT audience. As soon as the Pradeep Ranganathan starrer released on Netflix, a number of subscribers of the streaming platform who watched the movie, started attacking the film for various reasons.

“Love Today”, reportedly collected more than Rs. 70 crore against the budget of just Rs. 5 crore and became one of the most profitable films of the year 2022. In the Telugu region, the film is expected to end it’s theatrical run with Rs. 18-20 crore gross. Despite of the huge numbers the film managed to pull off through its performance at the box office, it failed to impress the internet audience. Previously, Sivakarthikeyan’s “Don” which collected more than Rs. 100 crore gross at the box office, faced similar issue post it’s OTT release.

“Love Today” starring Pradeep Ranganathan and Ivana got released in theatres recently and is still running successfully among the audience of Tamil nadu. Along with the lead stars, Yogi Babu, Sathyaraj, Radhika Sarathkumar, Raveena and many youtube stars were included in the cast list. Produced by AGS, the film impressed it’s target audience and is receiving positive reception from fans and from the critics.

Apart from the film’s engaging screenplay and relatable content, performance of the artists were also got highly appreciated by the audience and critics. After fans completed celebrating the film in big screens, on Thursday, it got released on Netflix.

An Instagram post with 5 slides, explaining how problematic the film is for women, is going viral in the social media platforms after Love Today’s online release whereas an online user who watched the movie said “Even after keeping the misogyny aside (don’t), love today was just corny af. I’m starting to hate the use of bgms in tamil movies. Ella mayuthukum oru sentiment orchestra.”

A post shared by The Women Of Cinema (@thewomenofcinema)

Even after keeping the misogyny aside (don’t), love today was just corny af. I’m starting to hate the use of bgms in tamil movies. Ella mayuthukum oru sentiment orchestra.

the fact that movies like ‘Love Today’ are successful and people empathize/relate with shit like this is the reason why we as a state collectively require psychiatric help pic.twitter.com/yQoNlN8669

love today is more dangerous than arjun reddy – uthama raasa saved her nudes w/o her consent,asked for sexualized pics from women:she lied to her boyfriend,didn’t say no to proposals. how are y’all okay w this?atleast arjun reddy was a flawed character. uthaman sir was normalized https://t.co/Tr1VIx1Vqv

Funny that almost everyone praised #LoveToday when it hit the theatres and now when it’s out on OTT, everyone seems to be pissed on the whole concept of it.
Why is this a frequent scenario?

I don’t know I didn’t like it since first itself? Several people I follow atleast have called out the problematic aspects even before the ott release.

Same reason films like Arjun Reddy became a hit. The making and screenplay pattern are too good but with a very bad message/idea at the core. These kinds of films are dangerous that you get entertained by something and then have to sit back and think that it was not in good taste

Previous articleTeacher Resigned After Students Discovered Her Adult Page!!
Next articleJUST IN : This Contestant Got Evicted From Bigg Boss This Week !! Result Leaked

Kushboo Abusing Back Her Followers Who Abused Her Very Badly !! Shocking Conversations !!

Kushboo Sundar is an Indian film actress, producer and television presenter who has acted in more than 200 movies. She is predominantly known for...