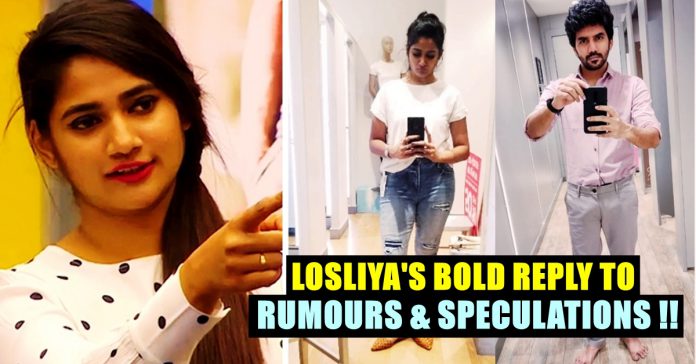 For a media report which said that Losliya is taking sly dig at Kavin through her caption for one of her post in Instagram, Losliya came up with a reply. The aspiring actress posted a story in her official Instagram account to make sure that she is not addressing anyone through her captions directly or indirectly.

The media report compared two different posts of Kavin and Losliya and said that the former Sri lankan news reader could have took an indirect dig at the “Saravanan Meenatchi” actor. Both their posts are mirror selfies and the caption of Losliya’s post which was posted 3 days ago read as “Life is trying to teach you something so accept your mistakes & see yourself in the mirror”

Check out the posts of both of the below :

This made media portals to speculate that Losliya is sending an indirect message to Kavin, her Bigg Boss housemate with whom she allegedly had a romantic relationship. Now, in a way clearing the air, Losliya came up with an Instagram story saying that her posts are “only about her”. She asked her followers and media to understand that the Instagram account belongs to her. “Everything I post here including my captions are about me. “only about me”. I don’t like talking behind” said Losliya who wanted media to concentrate on current situation we are facing.

“Hi everyone, hope you all are safe, First please understand that this is my Instagram, ithula nan podera captions or photos ellamai ena pathinathu. “only about me”. I don’t like talking behind. So if you guys want to talk about anything then talk about the current situation we facing. Thank you. Be kind” her story read.

After completing her stint in Bigg Boss house, Losliya committed in two projects in tamil film industry. In one of them which is titled as “friendship”, Losliya is going to share screen space with Indian cricketer harbhajan Singh and action King Arjun. In another project, Losliya is going to act along with Aari of “Maaya” fame.

Kavin completed shooting for a film titled as “Lift” in which he paired opposite to Amritha Aiyer of “Bigil” fame. Though Mugen won the title of Bigg Boss show, the trending topic throughout the show is Kavin and Losliya who were highly believed to have love relationship between them.

The way they behaved throughout the 100 days in the Bigg Boss house is the reason behind the emergence of fan pages such as “Kaviliya”, “Kavin Losliya” etc. When Kavin evicted himself in the 95th day, Losliya couldn’t tolerate the pain and kept her hand in between the door to make him stop from going. However, the current state of the duo’s relationship is unknown as many of the social media users believe that they parted their ways.