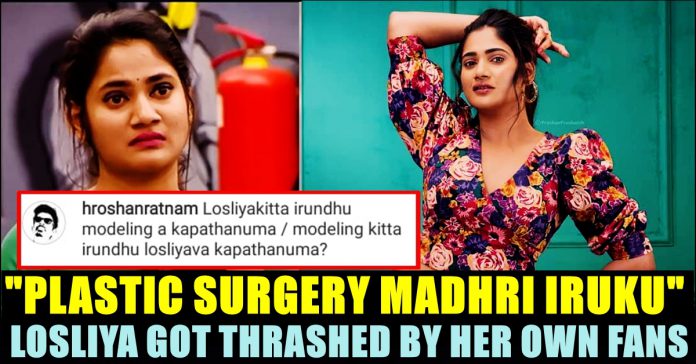 Bigg Boss season 3 successfully ended with Mugen rao grabbing the title. Sandy became the first runner up where as Losliya ended up being in the third place. The impact made by Bigg Boss Tamil season 3 has no end it seems. The contestants who got participated in the show are getting awards and we can see people either praising or trolling the celebrities who participated in it in their social media posts. This evidently proves that the trauma created by the 100 days reality game show is a never ending one for both the participants and for the viewers.

Losliya was the on of the most loved contestant by the audience for her cute looks and impulsive attitude. Her Neutral behaviour and being aware of not to make verbal spats with other contestants won her many hearts from the audience. Now after the Bigg Boss stint, the aspiring actress is very much busy in social media platforms.

Recently the actress uploaded a series of her pictures from her first photoshoot. Losliya enjoys more than 7 lakh followers in her official Instagram account. In the pictures Losliya was seen wearing a quirky attire with a stylish makeover. Check out the pictures below :

A very happy new year to all of my cupcakes. May this year be a blessed year for everyone. 2019 has been a best and a memorable year even though there were many ups and downs. So I thank each and every one for blindly supporting & encouraging me 😘 love you more & more & Idhu enda first ever photoshoot. I had very good experience. I thank Shot by @prachuprashanth Stylist @sindhukaran.jp Makeup @artistrybyolivia Hair @makeupreva

However, these pictures from Losliya disappointed most of her fans. Many stated that she would look beautiful even without make-up. Check out some of their reactions below :

What do you think on these reactions received by Losliya for her pictures ?? Comment your views below !!