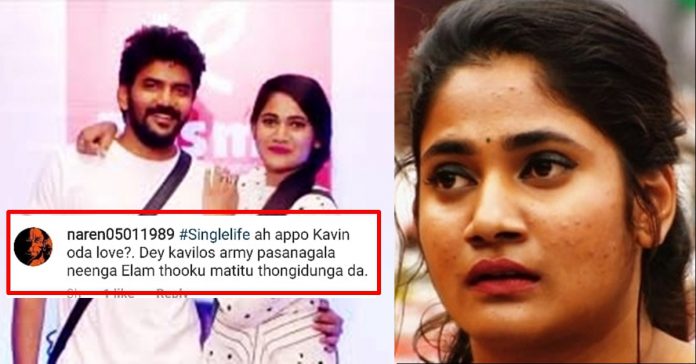 Though Mugen won the title of Bigg Boss show, the trending topic throughout the show are Kavin and Losliya who are believed to have a love relationship between them. The way they behaved throughout the 100 days in the Bigg Boss house is the reason for fans starting fan pages in the name of “Kavliya” and all. When Kavin evicted himself in the 95th day, Losliya couldn’t tolerate the pain and kept her hand in between the door to make him stop from going.

Kavin for his part, said to the newsreader that he will be waiting for her from outside. He even wished her to win the title and there is a belief that Kavin evicted himself only to make Losliya win by influencing his followers to vote for Losliya in the final week.

However, after coming out of Bigg Boss house, there were no pictures of them together released yet which left the followers of the duo in dejection. They have been demanding for a picture of them together through their comments in social media but to their shock, a recent post of Losliya’s friend hinted that the couple has never been in love at all.

According to the report of Indiaglitz, Kavin faked his relationship with Losliya to make the show look interesting by going by the script. But the fans are still believing that it is not true.

Check out the post of Losliya’s friend where she mentioned as “Single Life” t which has Losliya in the middle :

Check out some of the reactions this post received :

What do you think on Losliya parting with Kavin ?? Comment your views !!

“Stop This Stupid Obsession With How Much Each Actor Has Donated” This Kollywood Director Lashes Out On Public !!

Akshay Kumar Appeared With Fire To Promote His Web Series !! You Must See His Wife’s Reaction !!

Darbar released in theatres recently and is running successfully in theatres so far. Since the release, the film found itself amidst so many controversies....