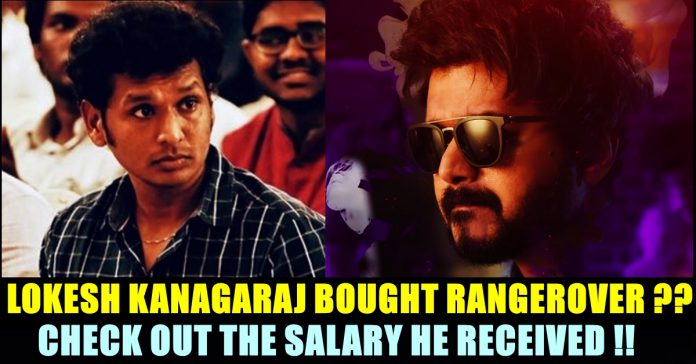 Director Lokesh Kanagaraj’s salary for working in the most expected film of the year revealed by the movie journalists of Valaipechu youtube channel. The film which is currently being in the post production process is scheduled to release during the April month. But sources are saying that the film is getting postponed due to the threat of the deadly Coronavirus. Audio launch of the film took place recently and escalated the expectation level for the film.

So far three looks of the film has been released and the lyric videos of Kutti Story, Vaathi Coming, Antha Kanna Paathakka is trending in youtube. Lokesh Kanagaraj, one of the most happening filmmaker of Kollywood right now is also made short films before entering Kollywood. Having directed just two films so far, he impressed both audience and critics with the brilliance of his work. Being released with “Bigil” which is one of the highly anticipated film of the year, “Kaithi” ran successfully across the theatres in Tamilnadu and screens were increased due to the positive word of mouth.

It is also believed that Lokesh is going to direct Rajinikanth under Kamal Haasan’s Rajkamal banner as his next film. This growth of Lokesh is astonishing and is inspiring lot of youngsters who are aspiring to become a filmmaker in future. Now according to Valaipechu, Lokesh was initially offered One and half crore as salary to work in “Master” but received 3 crores as the film’s market widened after the promotions.

Bismi, one of the journalist said that Lokesh bought a Range rover which is worth Rs. 1 crore on his birthday. He said that he bought the car by applying loan in axis bank. “Initially he was offered One and half crore as salary. But later the film’s business reached 200 crore, producers accepted to give him 3 crore as salary.” said Bismi in the video.

Starting his career as a bank employee, Lokesh entered Tamil cinema through short films. One of his short films featured in Karthick Subbaraj’s “Aviyal”. Vijay during his audio launch said that Lokesh is a “Kutti Surprise” as he has no film background. “He made us all turn our heads through his first film “Maanagaram” and made us watch his “Kaithi” multiple times.” Vijay lauded him. Comment your views on the growth of the youngster and let us wish him the best for his future ventures !!

Previous articlePETA’s Quarantine Post Embarrassed Its Followers !!
Next articleMinister’s Severe Warning To Those Who Have Travel History !!