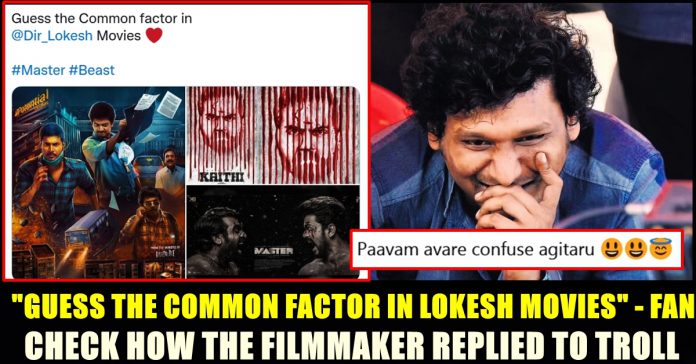 Director Lokesh Kanagaraj trolled a twitter post which asked the users of the social media platform to find the one similarity of his three films. The filmmaker, by adding a “thinking” emoji, wondered what could be similarities and the reply tweet is going viral in the micro blogging social media site with several kind of reactions from fans. Many stating that the lead roles of all the three films were inspired from the characters played by Kamal Haasan whereas Lokesh’s best friend and director Rathna kumar said that the protagonists of all the three films would jump from vehicles at a certain point.

Lokesh Kanagaraj who debuted in the year 2017, grabbed the attention of Tamil audience through “Maanagaram”, a hyperlink drama set in Chennai city. During the final stages of the post production work of his second film “Kaithi”, Lokesh got an opportunity to direct actor Vijay, one of the very few highest paid actors in Indian film industry. “Kaithi” became a huge hit as well.

After impressing the “Bigil” star with his intriguing script, Lokesh Kanagaraj decided to cast the busiest Vijay Sethupathy in the antagonist role. While emerging filmmakers are in desperation to work with any one of these stars, Lokesh managed get both of them on board for his third film. The film which got released after 1 year of its completion due to COVID 19 outbreak, did well in the box office.

Now, the young lad is all set to direct his idol Kamal Haasan in the upcoming flick “Vikram”, first look of which got released recently. He is currently working in the shooting of the film and it is also rumoured that he is one of the front runners to direct Vijay in one of his upcoming films. Lokesh is pretty much busy in social media platforms as well.

On Saturday, a social media user came up with a tweet asking the twitter users to tell the “Common factor” between the three films of the director. “Guess the Common factor in @Dir_Lokesh Movies” read the caption of the post.

With the post getting wide reach, Lokesh himself came up with a reply asking “Ennava irukkum” (which would it be ?) to denote that he hasn’t kept anything intentionally as a “common factor” in his three films. Check out his reply below :

However, many of his fans and followers came up with their own theories. Check out some of them below :

Previous article“I Wish I Can Go Back & Change Everything” – Yashika Gets Emotional
Next articleThese Famous Heroes Rejected The Massive Blockbuster “Pizza” ?? WATCH VIDEO

90 ML Director Anita Udeep Continues To Troll Dhananjayan For His Comment About Her Movie !! Check Out !!