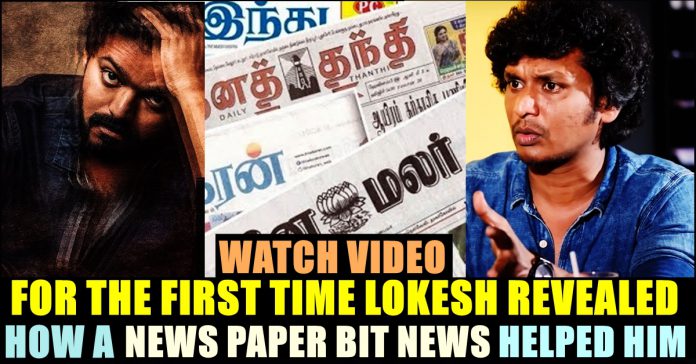 Lokesh Kanagaraj Revealed About The News Which Inspired Him To Make A Film !!

Director Lokesh Kanagaraj’s “Kaithi” film became one of the biggest blockbusters of the year 2019. The film received so many awards in several categories as it got acclaimed both commercially and critically. “Kaithi” film released along with highly anticipated “Bigil” and ran successfully despite of the star value of the Vijay starrer. Having no heroine, songs or flashback, “Kaithi” film broke the stereotypes and impressed the audience for its strong and intense plot. Karthi who already chose to do performances oriented films such as “Aayirathil Oruvan”, “Paruthi Veeran”, “Theeran Athigaram Ondru”, excelled in “Kaithi” in his own way.

Kaithi revolves around a story of a released prisoner who spent 10 years of Jail sentence. On his way to meet his daughter for the first time, the protagonist was forced to help a senior police officer from deadly drug lords. In several interviews, the director has said that the films like Die Hard and Virumaandi inspired him a lot to make “Kaithi”. People who watched the film also compared the film with a hollywood film which was released in 1976, Assault on Precinct 13. Few also compared it with Con Air, a film revolves around a prisoner.

Now, in a recent interaction with his fellow filmmakers, Lokesh Kanagaraj has revealed about a real life inspiration which instigated him to write the plot of the movie. The director has said that a news which took place in an old news paper inspired him to make the movie in his interview with Sudhir Srinivasan for Cinema Express.

The filmmaker said that he is opening about the fact after the release of “Kaithi” for the first time. “When I was eating my lunch with my assistants, I saw this news in a paper cutting. I don’t want to mention the name or the city. A Inspector of a police station held a party for his colleagues to celebrate his daughter’s marriage. To attend the party, all the police officials who were supposed to guard the station left. At that time, four college students who got detailed for drunk and drive released the culprits and flew away with walkie talkies. This is the initial to start Kaithi” said the young filmmaker.

Watch the video below from 44th minute :

In the interaction with his fellow filmmakers, Lokesh also revealed how Thalapathy Vijay gave him the access to shoot what he wants in his upcoming film “Master”. The sixty fourth film of Vijay is going to have Vijay Sethupathi as villain. Shanthanu, Arjun Das, Andrea, Malavika Mohanan are going to do the supporting roles.

As we all know Lokesh Kanagaraj, one of the most happening filmmaker of Kollywood right now made short films before entering Kollywood. Having directed just two films so far, he impressed both audience and critics with the brilliance of his work. In his directorial feature debut, Lokesh made a thriller and titled it as “Maanagaram”, which performed well at the box office.

Now he is very much busy in directing “Thalapathy”in his next film which is titled as “Master”. The film is going to get released on April and is said to be a gangster flick by having Vijay in a college professor role. Comment your views on this revelation from the filmmaker !!

As a response to the enormous amount of trolls and criticisms that the teaser of "Adipurush" is receiving, top VFX company "VFX Waala" that...

Pooja Hegde of "Beast" fame got extremely upset and came up with a post in her twitter handle calling out an employee of Indigo...