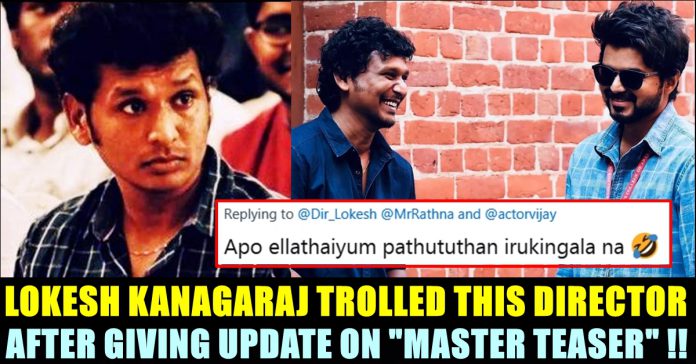 Lokesh Kanagaraj who astonished the fans and experts of Tamil cinema with his career graph by having just two releases so far, found some time to involve in an online banter with his friend and filmmaker Rathna kumar it seems. The filmmaker replied to a meme of his follower and trolled Rathna kumar for constantly asking update for his upcoming film “Master”. Rathna, an ardent fan of actor Vijay, worked as an additional screenplay writer in the film “Master”.

Lokesh Kanagaraj who debuted in the year 2017, grabbed the attention of Tamil audience through “Maanagaram”, a hyperlink drama set in Chennai city. During the final stages of the post production work of his second film “Kaithi”, Lokesh got an opportunity to direct actor Vijay, one of the very few highest paid actors in Indian film industry. After impressing the “Bigil” star with his intriguing script, Lokesh Kanagaraj decided to cast the busiest Vijay Sethupathy in the antagonist role. While emerging filmmakers are in desperation to work with any one of these stars, Lokesh managed get both of them on board for his third film.

Now, as the shooting and post production of “Master” got completed, Lokesh moved on to his next project in which he is going to work with Legendary actor and filmmaker Dr. Kamal haasan. He got committed to direct the 232nd film of Kamal Haasan and titled it as “Vikram”. Recently, the title teaser of the same released on Internet and went viral.

Now, as the theatres are slowly started functioning in the state, makers of “Master” decided to start the promotional activities of the film it seems. On Thursday, Lokesh and XB creators announced that the teaser of the film will be released on youtube during Diwali evening.

However, director Rathnakumar of Meyadha Maan and Aadai who is also a dear friend of Lokesh Kanagaraj, indirectly said that he wants the details of the next update which is the release date of the film. He posted a meme template from Rajinikanth’s “Baashha” and asked for the update.

This tweet from Rathna garnered huge response from the fans of Vijay. One of a follower posted a meme predicting the reply of Lokesh Kanagaraj. He uploaded the picture of a popular Vadivelu comedy where he would say “Konjondu Chutney vena tharen, nakkitu po” (All I have is some chutney, if you want it lick and leave) to Singamuthu.

Lokesh who ignored the tweet of Rathna, replied to this meme of the fan by mentioning the id of Rathna to troll him for constantly asking updates. Here’s the reply tweet of the filmmaker :

This evidently proves that Lokesh is silently watching all the comments regarding “Master”. This reply tweet of his received 4k likes in no time. Check out the reactions for it below :

“Master” film which was supposed to release during mid April, got postponed without further notice due to COVID 19 crisis. Now, it is expected to release during Pongal festival. The recently released title teaser of “Vikram” also raised the expectation level among fans. Comment your views on this cheeky reply of Lokesh Kanagaraj !!

“They Started Telling It Is A Leaked Video” Shalu Shamu Revealed About The Darkest Moments Of Her Life !!

Shalu Shamu, who recently revealed about her #MeToo movement alleging a Telugu director of asking her to sleep with her, revealed about the entire...

Ola Asked The Customers To Donate For The Drivers !! Internet Reacts