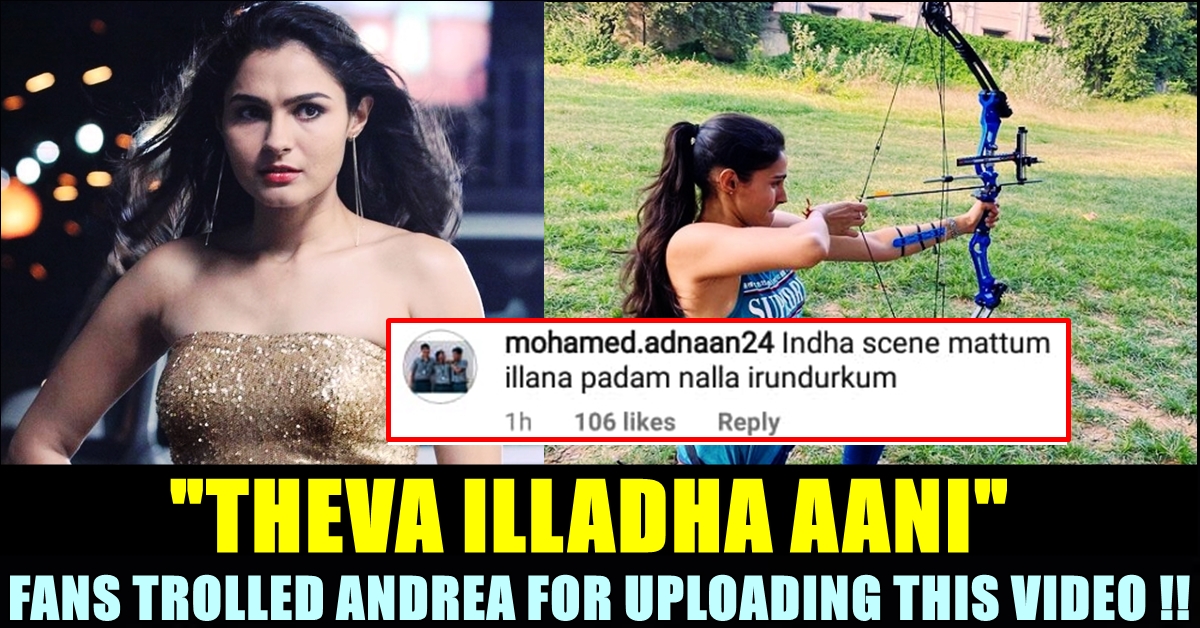 After uploading a video of herself practicing Archery in her official Instagram account, Andrea became a subject to massive online troll due to one particular scene that featured in the Vijay-Vijay Sethupathi starrer. The actress uploaded the video with a caption saying “Archery is a lot harder than it looks 🏹 #throwback #thistimelastyear #master”

“Practice makes perfect #bts #throwback #archery #master” she said in her next post in which she uploaded pictures of herself practicing archery for the scene she was going to perform in the Lokesh Kanagaraj directorial.

The ensemble cast of “Master” included Andrea, Malavika Mohanan, Arjun Das, Shanthanu, Vijay Sethupathy, Gouri Kishen, Ramesh Tilak with Vijay playing the lead. The most awaited Vijay’s “Master” released on theatres in Tamil nadu on Wednesday and the fans of Tamil cinema are celebrating the biggest event with extreme happiness as they are witnessing a proper mainstream feature film of a top tier Tamil actor after nearly one long year. Reviews and reactions for the Vijay and Vijay Sethupathi starrer are pouring in Internet from all the directions from fans and celebrities.

Andrea played a role of a professor in the film. She who teaches “Archery” to students, used her skills to take down a number of lorries which belongs to the villain’s gang towards the climax. The scene didn’t go well with the audience who watched it in theatre it seems. Most of her 21 lakh followers who commented on her post, expressed their disappointment by trolling and criticizing.

“Excuse me…. I went to restroom when u were on screen…. then I came…. and waited for u for the rest of the movie but could never see u” wrote a fan to troll Andrea whereas another one said that the movie would have looked more better without that one particular scene.

Andrea was last seen in Vettri Maran’s 2018 film Vada Chennai in which she played the role of Chandra. The entire movie plot revolves around the emotions of Chandra and the actress impressed the critics and audience with her performance. “Master” was supposed to release during April month of 2020 and got postponed due to COVID 19 outbreak. Now, after the makers decided to release the film on 13th of January ahead of the Pongal festival, the film got released in theatres with highest expectations. The star studded high budget action thriller was directed by Lokesh Kanagaraj of “Maanagaram” and “Kaithi” fame.