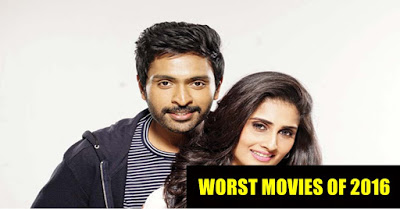 Check out the video below.
Disclaimer alert:
Idhula varra padam lam evlo mokkai na admin aana enake renduu moonu padam ennadhu nu kooda theriadhu. Still based on the reviews heard and discussions from other admins this article is being posted. So kindly bear the misinterprets if there are any.

The topper of the list. The kind of hype this movie created on people was beyond normal levels. But it went on like other Vikram Prabhu films. A trailer which stirs up emotions, a good bgm score which would make us expect some stuff in his movies, a good cinematography that’d itch us to hope the film turns good. But eventually it doesn’t. It’s not much into his name over the films he chose or performed but this one was definitely off the charts. Like it didn’t even come on the charts.
The film initially gave expectations of us expecting Vikram Prabhu to be someone who’s very patriotic and guards the boundary of the country, the skirmishes across it but right from the start, the film pulls up into disappointments.
From what started with him enrolling into the ncc to track the girl he liked and to entering the military for the subsidized booze, the film hardly touches patriotic.
The Pakistani army was portrayed as pure evil, so evil that they’ll shoot lambs that crawl under barbed wire to their side. This would have been quite a controversy if this was released over there. What the film missed couldn’t be pointed out because it lacked something in almost everything. A complete mess.

Okay. This one is a surprise to the list. This film went on to amass over 50 crores till date but the film and the story was below par. Huge was expected after seeing Sivakarthikeyan pose a female role in the film. Though the bgm and cinematography was super good, the film had little glitter to own a decent name. The film featuring a good cast had downfalls in many places including the script. Siva was good. Keethy’s role wasn’t upto the mark. And just like every other Siva Karthikeyan’s film this too had something missing in it.

Again this one is a surprise to the list. First case, this shouldn’t be considered as a quality film gone down for over expectations. Second, they experimented too much on this film. Right from Keerthy Suresh’s below par performance  as a Mallu girl, to a pantry boy trying to save a train with more than 500 people aboard it, this film went too much. The script was powerful, but the execution failed miserably. The film derailed from what was supposed to be a good action/thriller to a supposedly planned romantic/thriller and ended up disappearing from the tracks.

The stagnancy of the script and release is that heavy that the team decided to release part 2 of it. Wait, don’t expect a sequel. The original film which decided to run from the theater screens is renamed as sowkarpettai 2 and is expected to hit the screens soon. The expected horror film proved to be fatal to the audiences as it was more horrendous and horrifying than expected. People preferred staying out of the theater screen rather to sit hoping for dear life inside. The film which was released earlier this year went on to get a score of 2.7 from IMDB out of 10. A record by itself.

What this filmed did to the already damaged GV Prakash is further worsen his image in the minds of the audience. In fact, people started to prefer watching his films online rather than trying an outing in the theater as it doesn’t have any quality script or value to it. This film on one side was expected to be a good run in the theater ended up disappointing everyone. From what started as a guy’s twin love story, moved to a road side chase-thriller, was stuck in the middle in a plot which even the director din’t know what was happening, moved to a horror film in the middle bringing mottai rajendran into the scene for no reason, tried spreading awareness about misuse of social media in the later part and ended up into a trauma which had people’s heart in their throat for what reason they decided to hit the theaters for this film.

The hype this film got for the single track which was released previously was tremendous. From what the push it got due to the song, it went downhill, literally stampeding everyone’s hope on the way. The way they tried to depict Vikram Prabhu as a ‘mass hero’ didn’t end up good. Just like every other mediocre films released these days this movie too had it’s own share of thala-thalapathy references. From what a good plot turned out to a below par movie this film makes us believe Vikram Prabhu has that consistency getting etched to his name.

People who were born before 2000 would have seen this stellar film which brought ramesh-the sibling of jeeva into the big screens. The film would run on to become one of the most accredited films of that time, and that was when we saw ramesh running wild in a lead role. His next venture came out pretty late. He should have decided to not ponder into movies seeing his brother’s recent ventures tumbling down the hallway. The film was below par in everything, and the return ramesh expected ended up being a farewell call for him.

This film went on to amass crowd for the deep thoughts this movie depicted. The characters were deep. The way they depicted the female gender was deep. The story was deep. But the execution of all these things was in a really terrible way. The stellar cast was let down badly by the crew themselves. What would have otherwise been a movie which’d go on to impress people about the ‘tag line’ the film had to its central plot went on to be disgraced and humiliated in few places. Overall poorly executed.

The consistency Jeeva has been showing these days is too constant. The line up of films he had in his hand and the other ones he enacted the lead roles had too much disappointment, too much hatred and too much rotten tomatoes thrown at the screen. Pokkiri Raja was no bad to it. The film which had a unique way of story telling made everyone, including the hero yawn at important stages. From what they film should have been – a purely comedy oriented run, the film goes wrong in many states. From the powerful yawn that Jeeva owns- one which can shatter glasses to the characters of sibiraj and and hansika, the film goes illogical many a time.

This film disappointed me the most.
Chocolate boy Arya doesn’t seem to have a good run in the cine industry for quite sometime. The actor who was praised for movies like Naan Kadavul is finding it hard to get a good script in the industry and this film was another let down by him. Huge was expected from Arya-Sri Divya-Bobby Simha trio but this didn’t work well.
After the successful Malayalam version ‘Bangalore Days’ huge was expected from this movie. But it ended up disappointing every Tamil cine fan who wanted the successful Mallu film made in tamil.
‘A major drawback in the film is its screenplay. Some pivotal scenes don’t have appropriate closure; the effect being abrupt shifts and lack of communication of the intended emotions to the audience’

Previous articleMore Than My Impotent Ex-Husband Hurt Me, The Divorce Laws Were More Brutal And Eating My Time Away
Next articleBest 5 Holiday Destination For New Year Within India.