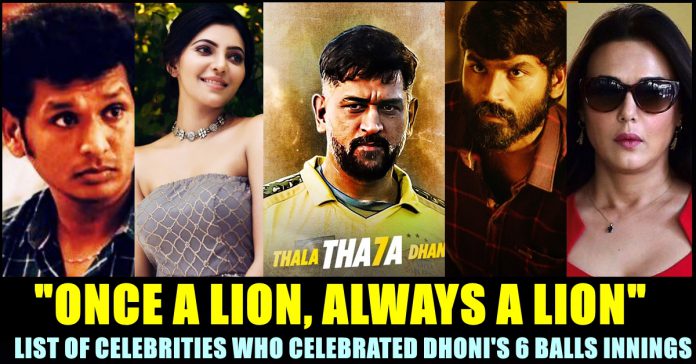 A list of cinema celebrities including actor Dhanush, director Lokesh Kanagaraj, Vignesh Shivan and many others celebrated Dhoni’s innings as their personal achievement through their social media posts such as tweets, Instagram stories etc. The cricketer, through his 6 ball innings, impressed the entire cricket fraternity. Along with cinema personalities, cricket experts, former cricketers and even politicians expressed their admiration over Dhoini’s finishing ability, even at the age of 40.

Team Chennai Super Kings qualified for the finals by beating Delhi Capitals for the first time in the 14th edition of IPL tournament. Chasing 172 runs, CSK opener Ruturaj Gaikwad and one down batter Robin Uthappa displayed a special show. Captain MS Dhoni who came in to the crease during the 19th over, smashed 3 boundaries and one six to finish the match in style.

“It’s the full team effort. It was tough when we didn’t qualify last time. Emotions were quite high. Forget what has happened till now, we wanted to make the most of the 3-4 games left towards the end. A lot of our batters made the most of that period which is why I feel we have come back strongly this year. Credit goes to the support staff and everyone in the team. Without their character you can’t really comeback like this.” Dhoni said in the post match presentation.

With the win, Chennai Super Kings became the first team to qualify for the finals 9 times in the history of IPL. Fans, celebrities, former cricket players, other sports personalities, politicians, cricket experts and many others from various departments celebrated Dhoni for the way he finished the game. Actor Dhanush came up with a tweet writing “7 … that’s it. That’s the tweet” with many other celebs uploading tweets admiring Dhoni.

Check out the tweets of celebrities below :

Once a Lion,
Always a Lion. 😊 pic.twitter.com/eLpSUYPiFZ

Wow what a match. My heart goes out to the young #DC team. Hard luck boys & all the best for the next game. Tonight belonged to #CSK. #Dhoni the finisher leading from the front, inspiring his players to give their best & keeping his cool at all times 👍 #DCvsCSK @IPL #Finisher

We will raise our collars once again 😎

Om Finishaya Namaha !
Great win from Chennai. Ruturaj Top class, Uthappa classy and Dhoni showing how important temparement is. Great win for @ChennaiIPL and what a fightback to reach the finals after the show last season.

What a finish it was! @msdhoni Bhai, my 💛 and belief on you just grows multifold with time! This moment of you taking the team into the finals will be cherished forever! #DhoniFinishesOffInStyle pic.twitter.com/84kWyudMYR

#Thala mass @msdhoni !!! Can’t be better than this! Back to #Finals! @robbieuthappa and @ruutu1331 @chennaiipl #cskvsdc what a game! #yellove