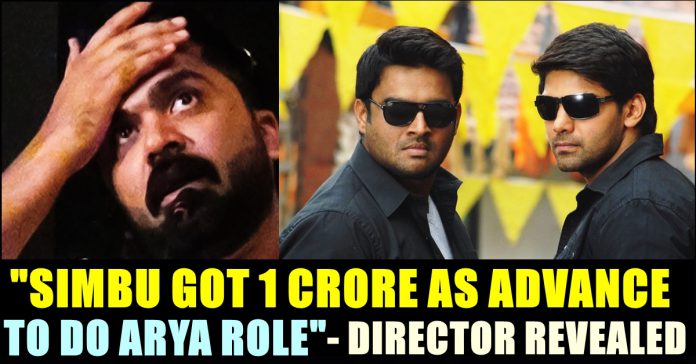 Now the filmmaker has appeared in an interview after a long time. In the interview, Linguswamy shared about his many experience during the making of his films. The interview was hosted by experienced actor Chithra Lakshmanan. The director revealed that Nayanthara was supposed to do the role of Tamanna in “Paiyaa”. “Due to salary issues, Nayanthara got opted out from the project” said Linguswamy.

Then he explained how Yuvan Shankar Raja’s work helped “Paiyaa” to become a blockbuster. Later Linguswamy revealed a shocking fact about controversial actor Simbu. He said that Simbu was supposed to act in “Vettai” instead of Arya initially. He further added that Simbu bought 1 crore as advance and didn’t return it till now.

While talking about Simbu’s choice in “Vettai”, Linguswamy said, “It was supposed to be Simbu and Madhavan in Vettai. We even gave 1 crore as advance during that time but didn’t get it from him still” said Linguswamy to Chithra.

When Chithra Lakhman asked why Simbu couldn’t work in the film, Linguswamy said “Simbu had lot of commitments at that time. I couldn’t narrate story to him as my wish and the atmosphere didn’t allow me to do what I wish to do as well. I don’t know how people see me as a filmmaker. But I won’t attend calls during my film’s shooting. I work for my film with uttermost sincerity. Apart from success and failures, I give more importance to discipline. Punctuation is important to me. Those who couldn’t work with the same sincerity will not connect with me. After realizing it, I chose Arya to do the role who respects me a lot”

It is notable that Studio Green’s owner Gnanavel Raja faced a huge loss due to the absence of Simbu which made him to file a complaint, though he has a good bond with the actor as friend. Comment your views on this statements of Linguswamy !!

Prabhakaran, husband of current Bigg Boss show contestant Anitha Sampath came in to defend his wife from the harsh comments of a popular celebrity...

Actor Vijay Sethupathi who is known for his sensible public statements has came up with a tweet. The two major problems of country India...