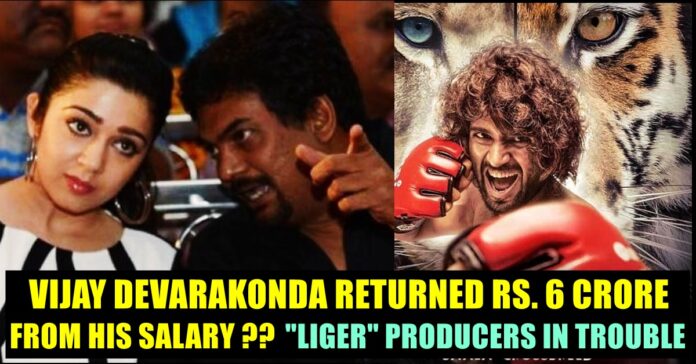 “Liger” Producers Refused To Give Compensation??

A report emerged saying that “Liger” producer Charmme and director Puri Jagannath who is also a producer for the film, refused to provide compensation for the distributors who faced loss after buying the Vijay Devarakonda starrer. In the meantime, a number of reports said that the film’s protagonist Vijay Devarakonda is going to return Rs. 6 crore from his salary after the film got flopped.

According to a report of Telugu cinema, all the distributors of the film who bought the film for an hefty amount from the producers, have faced at least 70% of loss. They are demanding compensation from the makers, says reports.

After receiving no response from the producers, the distributors are planning to approach film champer to register their complaint, said report. The producer duo, reportedly said that they themselves faced a huge loss after producing the movie.

Nearly a week ago, a number reports surfaced saying that Vijay Devarakonda returned Rs. 6 crore from his salary after his film became a box office dud. The budget of “Liger” was said to be around Rs. 100 crores, according to Zoom news. However, the film managed to collect only around Rs. 66 crores worldwide including the collection of Rs. 18 crore in the Hindi region where the film was expected to earn more.

As per the report of News 18, the lead actor has decided to return Rs. 6 crore from his whole salary to compensate the loss for his producers. Also Read : Vijay Devarakonda’s Upcoming Film Dropped Due To “Liger” Result ?? Producer Opened

The film also failed to make an impact financially. “Liger” has VJD as an MMA fighter who goes on to win his matches. Known for his films that involves romance and violence, Vijay was expected to rock in the never seen before Avatar of him. Along with Vijay Devarakonda, the film starred Ananya Pandey, former boxing champion Mike Tyson and others. The film wa directed by Puri Jagannath of “Pokkiri” and “Temper” fame. Renowned Bollywood filmmaker Karan Johar is one of the producers for the movie.

The most awaited Vijay's "Master" released on theatres in Tamil nadu today and the fans of Tamil cinema are celebrating the biggest event with...

According a number reports from renowned publications, actress Tamannah Bhatiya who is known among Tamil audience for pairing up with Vijay and Ajith, caught...