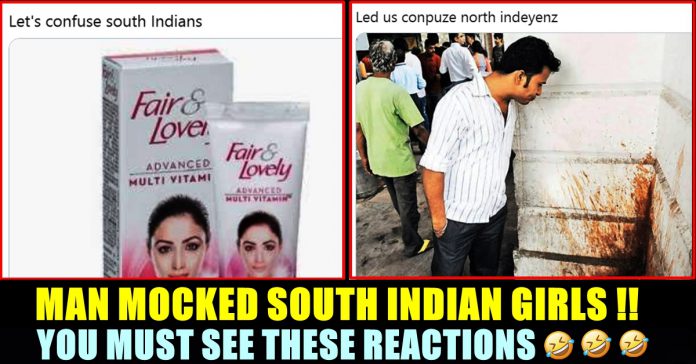 The culture differences between south and north India has been widely seen in all aspects. They actually show a peculiar uniqueness in their way of food, dressing, cultural activities, music, art etc. The difference is so obvious, that one can feel they belong to two different continents.

This imaginary distinction between north-south India has a history that goes back to the pre-independence era. From time to time, this fault line becomes active, leading to the polarisation of North-South India. Since the emergence of social media, we have seen people from both the regions involving in verbal spats directly with each other with respect to cinema, sports, language etc.

One such Twitter user whose bio can be seen written in Hindi language, posted a tweet mocking the people, especially women of South India. In a way of objectifying the women who belongs the South region of the country by saying that they are dark skinned, the Twitter user uploaded a picture of popular fairness cream product “Fair and Lovey” and wrote “Let’s confuse south Indians”

This baseless tweet from him grabbed the attention of the active twitter users of South India. They who thought of giving him back what he deserves, started posting reply tweets pointing out their literacy rate etc. The interesting fact about the reply tweets are, that they were mostly posted by the Tamil nadu based twitter users and the replies received three times more likes than the original tweet.

Check out some of the reactions for the tweet below :

Hi, I think I found something that belongs to you. pic.twitter.com/lF1gUYAO2z

You means Aishwarya Rai or Meenakshi Sheshadri or Jayapradha or Deepika or which one you are comparing here to confuse.

Or is it Kajol or Ajay or Bojpuri Hero's??

As far as I heard .. all in North India were dark too . Half of them became Fair after muslim invasion and the lovely after European invasion

Country India is known for its unity in diversity across the world. Let us restrain ourselves from spewing hatred at each other by spreading love.

Previous articleVaaranam Aayiram “Meghna” Replied To This Recreation Of Fans !!
Next article“When Is CSK’s Championship Celebration?” Kollywood Director’s Tweet Ahead Of CSK Vs MI Match !!

Days ago, Prime Minister Narendra Modi performed the ‘bhoomi poojan’ in Ayodhya for the Ram temple, bringing to fruition the BJP’s ‘mandir’ movement that...

On Thursday morning, a number of prominent media portals came up with a report saying that actress Samantha has been admitted to hospital followed...