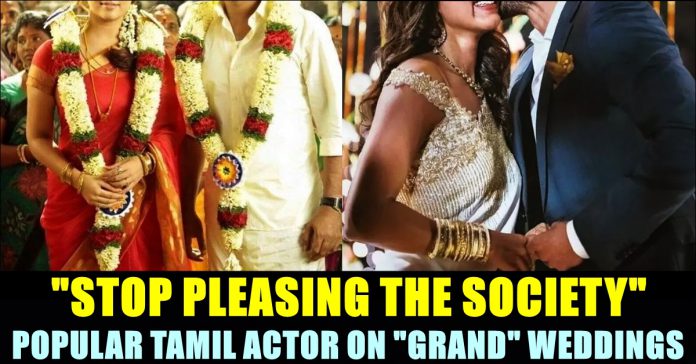 On Friday, director Cheran who is known for making quality films in Tamil film industry, came up with a thoughtful opinion about expensive marriages that are being arranged by people in our country. Uploading a picture in his official twitter account, the filmmaker insisted on Indians going with “simple” weddings and expressed his wish of people avoiding “grand” weddings.

Director Cheran, the four time national award winner, surprisingly participated in the season four of Bigg Boss show and shocked everyone by lasting in the game show for 91 long days. The last film he helmed was ‘Thirumanam’ which released in the year 2019. The film talked against “grand” wedding and on how one can save a large amount of money by conducting a simple wedding. He who played the role of a protagonist in the film, also wrote the story and directed it.

In the climax of his film “Thirumanam”, the protagonist would say that she saved Rs. 35 lakh by conducting a simple wedding and would deposit the money in the bank account of his sister who is the bride. He would also help the groom to do organic farming with the money he saved. Now, in a way of reiterating the same, Cheran has uploaded a post in his official Instagram account which is garnering huge reception from his followers.

In India, people love to have the big wedding where hundreds of guests would attend a stunning venue armed to the nines with fashion and gifts for the happy couple. The evening is big and wild, with plates upon plates of delicious food and a dance floor that keeps on giving. However, for a middle class family, it’s the empty pocket that lasts at the next morning of the grand wedding.

Director Cheran, through his post, asked people to stop pleasing the society. “Indians really need to start having simple weddings than a grand one.” read the picture Cheran added which also says that society is not going to help when a family is struggling financially. “Its very important message to middle class people….” read Cheran’s caption for the post.

This post of the filmmaker garnered positive reactions from his followers with many agreeing with him. People also argued with the director saying that many businesses are depending only on Wedding and said that it’s a personal decision of each and every individual.

Journalist Got Upset On Seeing This Recent Youtube Sketch Video Of “Parithabangal” !!

Youngsters involving themselves in entertaining the public through youtube platform by making sketches, spoofs, vlogs, cookery videos and other visual contents became a trend...