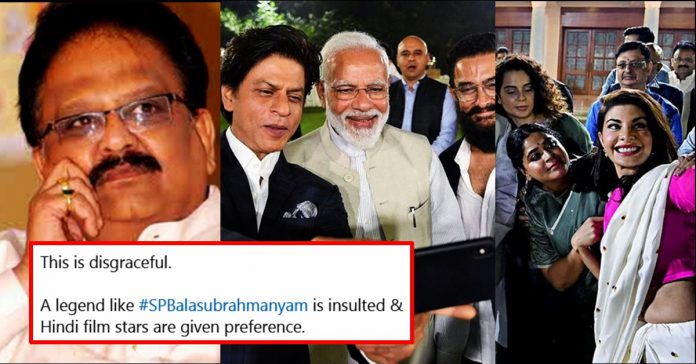 Prime Minister Narendra Modi conducted a reception lately and it included the participation of many celebrities from the Bollywood industry. Starting from Shah Rukh Khan, Aamir khan to Jacqueline Fernandez, many of them were present in the reception which is evident through the selfie photographs they took with the Prime minister. The pictures are doing rounds in social media platforms.

Meanwhile legendary singer S.P Balasubrahmanyam who is known for his contribution in the music industry of Indian cinema, has posted an opinion of himself about the event in his official facebook account as he took part in it. In the post, SPB said that he was asked to handover his cell phone to securities and was provided a token for the same. The singer doesn’t seem to have problem with that as it is a matter of safety of the Prime minister.

However, according to the FB post, the legendary singer felt bewildered on seeing the selfie photographs of north celebrities after attending the show. The post of SPB said “I am grateful to Ramoji Raoji, (Eenadu), because of whom I was able to attend a reception hosted by our Hon. Prime Minister at his home on the 29th of Oct. Upon entering the premises, we were asked to leave our cellphones with the security personnel and were given tokens for the same. But I was bewildered at the STARS taking selfies with the PM on that day. THINGS THAT MAKE YOU GO HMMM?????”

However, the singer later stated that he was treated as same as the other celebrities and said that his facebook post is not a complaint. “I’m a simple man and I had expressed what had happened that day. It was not a complaint. I was given the same respect as anybody else. I was only asking about how we were not allowed to take the phone inside while some people were taking selfies. That’s it,” the statement of SPB to the media said.

Though the statement of SPB made it clear that the incident doesn’t hurt him personally, the way he was treated indeed hurted the fans of his work. They started expressing their emotions through social media platforms such as Twitter.

Dear sir #SPBalasubrahmanyam, they do not deserve to take photo or self with the legend like you. They are Acting in their reel life, and pretending in their real life. Pretender enrtains other pretender only. YOU ARE THE ORIGINAL HERO OF INDIA. Do not worry about these fakes.

A legend like #SPBalasubrahmanyam is insulted & Hindi film stars are given preference. pic.twitter.com/zSQwFqWX55

Deeply sad to hear about the way south legend SPB sir and others have been treated at @narendramodi ji's party. ☹️☹️@iamsrk We love you but I suppose the feelings are not mutual. 💔#MondayMotivation #EVETOT #Discrimination @PTTVOnlineNews @charanproducer @polimernews pic.twitter.com/kA3mdKp0bq

Why this double std some star allowed to take cellphones while meeting honorable PM and some not, why not followed the security procedures followed equally. Why #SPBalasubrahmanyam only followed the rule. These are our heroes @amirkingkhan @karanjohar @ektaravikapoor pic.twitter.com/eK4AmrBrIA

What do you think on the way SPB treated in PM’s reception ?? Comment your views !!

Followed By Ashwin, This Emerging Actor Got Angry On The Negative Hashtag Against Vijay !!

The online fights between Ajith and Vijay fans get ugly on Twitter time and again. Recently, a hashtag #RIPactorVijay was trending on the microblogging...