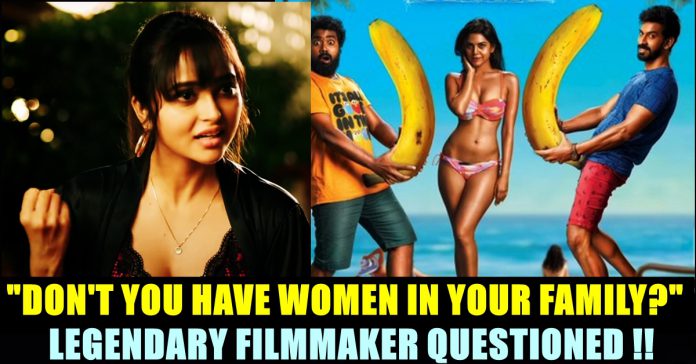 The teaser of “Irandam Kuthu” got released in Internet recently and left legendary filmmaker Bharati raja in a disappointed state. Director Santhosh P Jayakumar who made Tamil films such as Hara Hara Mahadevaki, Ghajinikanth, Iruttu Arayil Murattu Kuthu released the first look of his upcoming film “Irandam Kuthu” last week. Santhosh is making his acting debut through the sequel of his adult horror film “Iruttu Arayil Murattu Kuthu”. The first look poster showed Santhosh and Danny holding an artificial banana in a beach atmosphere with a girl wearing bikini.

This teaser instigated netizens in to react in various ways. While a set of people opposed it for the way it is filmed, other set of people said that there is nothing wrong in the teaser as the makers have made it clear that it is a content meants for adults.

Meanwhile legendary filmmaker Bharati Raja who directed Rajinikanth and Kamal Haasan in his filmmaking career which spanned over 4 decades, released a press note condemning the film’s content. The filmmaker believed that cinema has made many revolutions such as Caste and religious abolition, Women empowerment, Youth empowerment etc.

In the press note, Bharathi Raja said that it feels painful for him to see people destroying the art form in the name of doing “business”. “Yes, cinema is a business too. But using “banana” in a cheap way to promote the film among public makes me upset. Is this why legends configured Cinema ?” Raja asked.

“Cinema can reflect real life. They can show such things in a semiotic way. But keeping the bedroom for public’s views is not a right way to do it. I am not a person who whines about “culture”. But I want my home to be disciplined” he said in his press note.

“I couldn’t bear seeing the advertisements for the film “Irandam Kuthu”” said Bharati Raja who questioned whether there is no women in the families of those people who made this film. “Don’t the women in their families condemn these activities of them ? No matter if they condemn or not, as a senior person of this industry, I would condemn these kind of activities. I request government and censor board to take strict actions against these kind of films.” he said.

The filmmaker further accused that these kind of films are influencing crimes against women and children and requested people to realize it.

Comment your views on these statements of Bharathi Raja !!

Previous articleVarun Chakravarty Praised Dhoni In Tamil After Taking His Wicket !!
Next articleDinesh Karthik Once Again Instructed Varun In Tamil When Jadhav Came In To Bat !!

For the first time in Tamil television history, Avengers : Endgame of Marvel Studios is going to get telecasted in Vijay Television on Sunday...