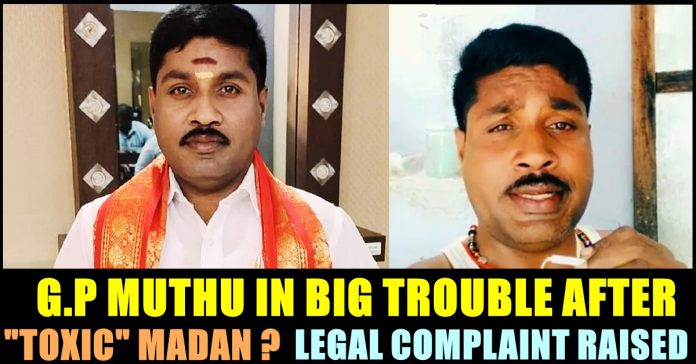 G.P Muthu lives in a village named Udangudi which is located in Thoothukudi district. Repairing old windows, doors which were made of wood is his occupation. He is also running a lumber shop in his village, says reports. He who has four children, started uploading videos in Tik Tok during his work time to engage himself. With Tik Tok being a widely used mobile application of that time, videos of G.P Muthu went viral among the users of it.

He imitated Tamil film songs and his videos started receiving views in millions. G.P Muthu who started doing videos for entertainment, started spending his full time in Tik Tok. He became a subject to severe online trolls and didn’t stop doing videos in Tik Tok. After the TIK Tok app got banned, GP Muthu initiated a youtube channel and doing videos in it.

Currently, the youtube channel of GP Muthu enjoys 8 lakh plus subscribers with half million views for every video. It is very well known that GP Muthu often uses abusive language to express his frustration over the people who are trolling him. Recently, a youtuber named Madan got arrested for degrading women in his videos through abusive language. Now, a complaint has been raised against G.P Muthu and three other youtubers for using obscene language in a public forum.

According to One India, an individual named M.M.K Muhaideen issued a legal complaint to the Superintendent Police of Ramanathapuram district. In his complaint letter, Muhaideen said that videos of people using obscene language are going viral in social media platforms nowadays. “Students are supposed to spend more time in Internet to learn as Government has imposed a lockdown for school and colleges. Using the situation, a number of people such as G.P Muthu, Trichy Sadhana, Baby Surya, Chikka endra Chikkanthar are misleading innocent students by uploading videos talking obscene languages and making money out of it” the complaint letter read.

“Lakhs of people are watching their videos and their gestures, language would ruin the culture of Tamil nadu. Their obscene videos are made in a way of affecting children. These youtube channels which are ruining the young generations must be banned. I request to take stringent action against those who are making these videos which are spreading venom among children. I have attached the links of few such posts with this complaint” the letter further read.

The complaint has been sent to the special section of Chief minister and the four youtubers including G.P Muthu and Baby Surya are in trouble, says reports.