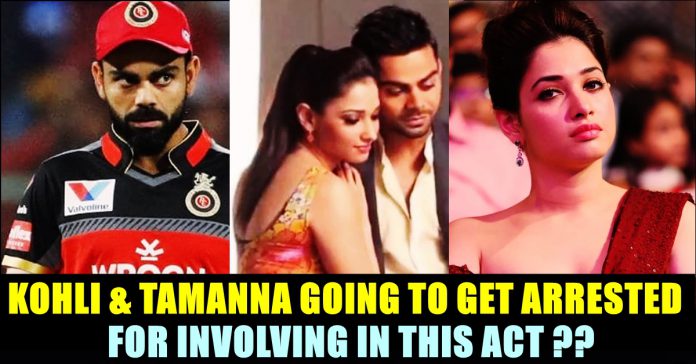 A Chennai based lawyer named as Suriya Prakasam filed a petition against Indian national team captain Virat Kohli and actress Tamanna Bhatiya for endorsing online gambling mobile applications which are killing youngsters. The case was filed, followed by the death of Nithish, a Chennai student who killed himself after losing money in an online trading app named as Casto club. Many people in social media including political parties demanded ban on online gambling apps after Nithish’s death. The petition was filed in Chennai High court.

In the petition, Suriya Prakash alleged that online gambling is increasing in the country in daily manner, despite of the ban for gambling in the country. “Youths are using the applications for entertainment and getting addicted to it days later” he said in the petition. “They are borrowing money for high interest to invest in these apps and are forced to commit suicide due to depression after losing the money” he added.

He also accused the owners of the gambling apps for hiring high profile popular personalities such as Virat Kohli and Tamanna to act in the advertisements of the apps in order to brainwash the youngsters. He demanded immediate arrest against the owners of such mobile applications and against Kohli and Tamanna who advertised it through his petition. He wanted those apps to be completely banned.

When he requested judges Hemalatha, M.M Suresh to consider his petition as an emergency case, the bench said that the hearing will be held on coming Tuesday (August 4). Recently, men got arrested for involving in gambling in an apartment. While hearing the case, Madurai branch of Chennai high court asked “why online gambling apps shouldn’t be banned?”.

Recently, A student in chennai committed suicide after losing money in an online game named as “Casto Club”. Named as Nitish Kumar, the youth wrote a suicide note before killing himself to let his loved ones know about the cause of his death. The 20 year old college student died in a tattoo studio in Aminjikarai. The Youth who was living with his parents and a brother in TP Chathram, is a final year BCA student in a private college in Chennai. He worked as a part time employee in a tattoo studio in Chennai.

“I’m the only one who is responsible for this decision. I lost my hard earned savings in an online game named as “Casto Club”. I even took Rs.20,000 from the shop and lost it too. I got depressed and now decided to take this decision even though it is wrong. I don’t have any other choice. I’m so sorry Sekar anna for losing your money without your permission”. the suicide note of Nithish read. Read : Student Commits Suicide After Losing Money In Online Game !!

Previous articleLeaked Video Of Sushant’s Girlfriend Talking About “Extortion”!!
Next articleGirl Struggled To Attend Online Class Without Smartphone !! Actress Sent Her An iPhone