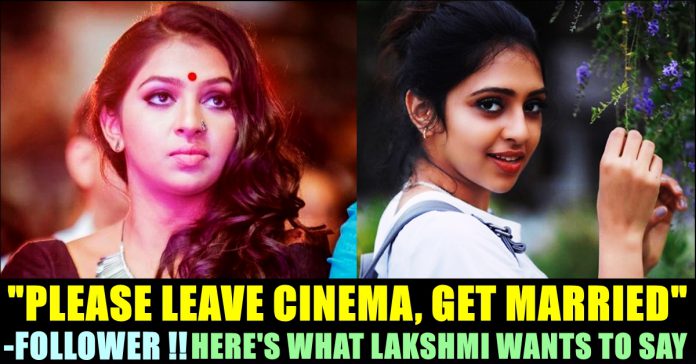 After a long gap, actress Lakshmi menon who rose to fame among Tamil cinema audience through films such as “Kumki”, “Vedhalam”, “Jigarthanda” became active it seems. She couldn’t be seen since her last film “Rekka” with Vijay Sethupathi which was released in the year 2015. Now, after five years, Lakshmi menon became busy again by posting pictures in her official Instagram account through which she is currently enjoying 70 thousand plus followers. She started posting pictures in her space from April month of this year.

Unlike previous era where fans and followers waited for hours and hours in front of the houses of their favourite cinema starts to get a glimpse of their appearance, now, anyone who owns a smartphone and data pack could talk to their idols with the emergence of social media. Fans trying to interact with their favourite celebrities through online medium is common nowadays as it became the easiest way for an attempt.

Few would put their heart and soul into that tiny box in Instagram, Facebook and Twitter which are meant for two-side conversation. One such ardent follower of Lakshmi menon, saw an Instagram video story of the actress playing with her cat in her home, requested her to get married to lead a peaceful life.

In the first story, Lakshmi menon was teaching dance lesson to her cat “Leoski”. “Dance lesson for Leoski but he already is a bro” she wrote in the story.

Lakshmi who saw these messages from him captured the screenshot of it and responded to him through her Instagram story. “Look at this humble, loving, caring well wisher of mine. Thinks an angel like me should get married to someone and find my peace. Pathetic just pathetic” wrote Lakshmi and added “Grow up” to express her fuming over the messages se received.

On the work front, the 24 year old star is expected to be seen in Prabhu Deva’s “Yung Mung Sung” and a film named as “Sippai”. She is also going to pair with actor Gautham Karthik in an untitled project. Comment your views on this reply of Lakshmi menon to the random Instagram user.