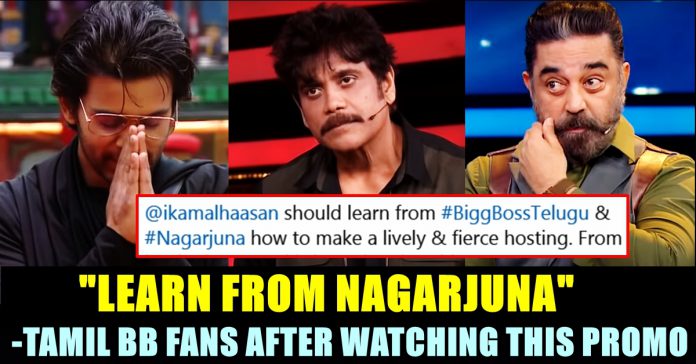 After seeing a promo of Bigg Boss Telugu season 4, fans of Tamil Bigg Boss show expressed their disappointment over Kamal Haasan. They wanted Kamal Haasan to act as strict as Nagarjuna who asked a male contestant to get out of the house immediately for not performing a task. Nagarjuna also streamed a video to expose the words uttered by the contestant named as Abijeeth.

Fourth season of Bigg Boss show Tamil and Telugu inaugurated this year by having Kamal Haasan and Naagarjuna as hosts respectively. Kamal Haasan who has been successfully hosting the show for the past three seasons, roped in to host this season as well. The Telugu Bigg Boss show’s first and second season were hosted by Junior NTR and Naani respectively. Nagarjuna hosted the third season and continued to host this season as well. Actresses Samantha and Ramya Krishnan appeared as guest hosts as well.

Telugu Bigg Boss is being telecasted in Star maa whereas Tamil Bigg Boss is being streamed in Vijay Television. Most recently, Star Maa uploaded a promo in their official twitter account which showed an angry Nagarjuna roasting a number contestants inside the Bigg Boss house. He who condemned a contestant named as Abijeeth for nlot performing a task, streamed a video exposing his conversation with his co-contestants during the week days and asked him to leave the Bigg Boss house by showing the door.

Check out the promo below :

As soon as seeing the promo, fans of Tamil Bigg Boss show wanted Kamal Haasan to give the same treatment to the contestants. Some of them asked him to learn something from the Telugu actor who is known amon Tamil audience through films such as “Ratchagan” etc.

“Kamal Haasan should learn from #BiggBossTelugu & #Nagarjuna how to make a lively & fierce hosting. From beginning Kamal is lousy hosting this season. No kurumpadam, No strong questions to Vijay TV gang..” a Bigg boss follower wrote in his tweet whereas another one said “Kamal Haasan Sir, we expect more than this.. You were roaring in last 3 seasons. We need that kamal sir (Like a Lion). #குறும்படம் please. In Telugu Nagarjun Garu rocks “

@ikamalhaasan Sir, we expect more than this.. You were roaring in last 3 seasons. We need that kamal sir (Like a Lion). #குறும்படம் please. In Telugu Nagarjun Garu rocks 👇@vijaytelevision https://t.co/PTGeQsHthh

@ikamalhaasan should learn from #BiggBossTelugu & #Nagarjuna how to make a lively & fierce hosting. From beginning Kamal is lousy hosting this season. No kurumpadam, No strong questions to Vijay TV gang.. https://t.co/HTqhfmdpgc

Damn I hate to admit but Nagarajun is doing a lot better than Kamal, No bullshit talks straight away to the point.

If only Nagarjun was tamil host, Bala would be tarnished like this irrespective of being the content giver (so is abjeet)#BiggBossTamil4 https://t.co/v2mu15w38y

I don’t think KH sir will address all issues. Sorry to say this I have seen Nagarjuna sir , he address all the issue not going out of box. It’s lagging somehow in Tamil BB

However, several fans of Telugu Bigg Boss show schooling Nagarjuna to host like Kamal Haasan. “Nagarjuna pls learn hosting basics from Kamal Hassan the legend..” a fan wrote. Another follower mentioned how Kamal treated Oviya when she denied to perform tasks in season 1. They even slammed Nagarjuna for making insensitive comments on “cross dressing”.

Look at how Kamal sir treated Oviya vs how Nag has been treating #Abijeet. #BiggBossTamil4 any day a better place than #BiggBossTelugu4 .
Toxic masculinity chuyisthe evict chestaru in Tamil like they did to Saravanan. Ikkada host kuda vallatho Kalisi cross dressing Pai joking 🤦🏽‍♂️

This Tamil Actress Went One Step Ahead & Traveled To Her Native For 10 Years Challenge !! Check Out !!

Shanthanu's nature of being very much interactive with his followers in Twitter made him to reply to a twitter user who spewed unnecessary hatred...