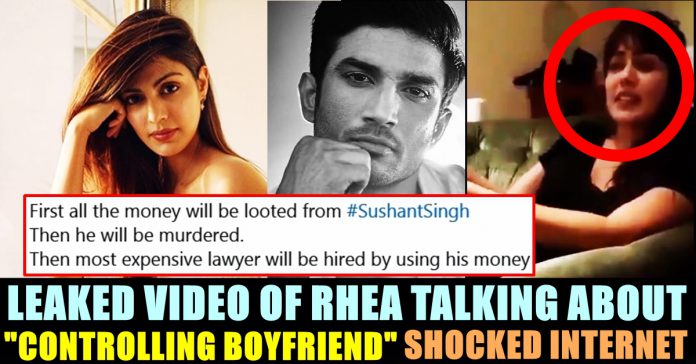 Days after Sushant’s father filed case against Rhea Chakraborty, the late actor’s girlfriend, the Bihar police have found an undated video of the actress using words such as “hafta” (extortion), gunda etc. Rhea Chakraborty has been accused of “abetment to suicide” by the father of “M.S Dhoni” actor. She also got accused of number of other charges.

Rhea Chakraborty, girlfriend of Sushant singh Rajput confirmed her relationship with the actor and revealed that they were living together throughout the lockdown before she left his apartment due to a fight which broke out between them. She reportedly informed police officers about the details of their fight and showed them they were in touch via phone and text message after it during the interrogation. Rhea was the last person Sushant called before going to bed.

On Thursday, Rhea told the Supreme court that she has been incorrectly implicated in the FIR filed by Sudhant’s father. Now, a viral video of her is doing rounds in the social media platforms. In the video, Rhea can be seen talking about controlling her boyfriend. Though she was not using the late actor’s name directly, she can be seen saying that her boyfriend thinks that he is a gangster but he does not know that herself is the real don.

The actress who was mimicking a don, was unaware of the video being recorded. “I am the bigger don. I know how to manipulate these small goons. My boyfriend also thinks that he is a gangster. But he does not know that I am the actual don. I belong to a different class than these smaller goons. I don’t get my hands dirty, I make others to do the task. For instance, I can even ask them to go to a producer and collect “hafta” (extortion). They think they are the don but in reality they are working for me” Rhea says who asks the one who is recording to stop. “Don’t record this” she can be heard saying. Rhea also mentioned about a big man above her whom she can’t name.

This video is being widely shared by the netizens demanding immediate arrest against the actress.

#rheachakroborty This gold digger should be jailed for life!!!

RT if you Agree!

First all the money will be looted from #SushantSingh
Then he will be murdered.
Then most expensive lawyer will be hired by using his money to fight against Sushant’s Father.#SushantConspiracy #RheaChakroborty #SushantTruthNow pic.twitter.com/xMxLabZjxl

I’d like people to have a look at this posts it’s from @Tweet2Rhea Instagram. Posted on 21st Sept 2019. Thé poem she wrote ran a shiver down my spine. Tell me was she revealing the plan from the start? What do you think? #RheaChakroborty #Dhara302forSSRCulprits @ishkarnBHANDARI pic.twitter.com/f2so0TPFMO

She is #rheachakroborty‘s lawyer … She went with empty hands and came out with 2 bags.

1. may be laptop
2. may be money or some evidence.

I don’t know how did she hired a lawyer when she doesn’t have a penny for herself. #Dhara302forSSRCulprits#JusticeforSushantSingRajput pic.twitter.com/eLSCdIMAqO

This is Sushant. He is real.
Don’t u dare to think he is depressed.
Ankita also confirmed it.

This bollywood lobby is also responsible Arnab. I m sure that they are helping #RheaChakroborty .#ShameOnMumbaiPolice. pic.twitter.com/PDNUqd7U9i

Aadhar Card Is Must For A Hair Cut In TN !!

"Unlock 1" which started from June 1 requires Aadhar Card for a hair cut in salon. Not only for the long needed hair cut,...