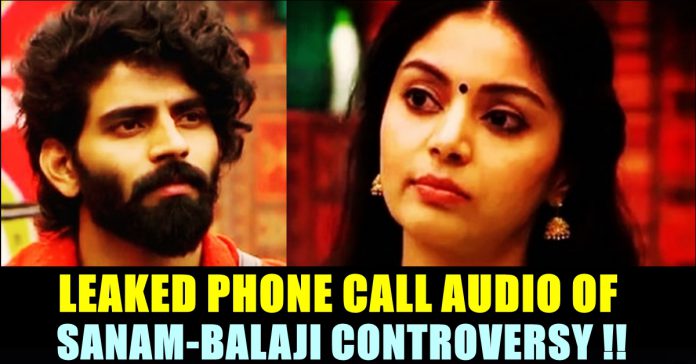 After the release of the 46 seconds long audio which contained the phone call conversation of Joe Michael and Balaji Murugadoss, a 6 minute long audio of the same got released in youtube. Through the audio we could hear, Bigg boss runner up Balaji Murugadoss and Joe Michael having an argument over a statement uttered by the former.

“In Bigg boss house, You said that you have friends and you can prove it with a proof. Now, I want you to provide the proof you mentioned in social media.” says Joe Michael in the audio that was released by him earlier in his twitter account. Balaji could be heard replying “I have already told you that I will face it legally”

Further Balaji said “You are not even worth to get my attention in social media ok.” to which Joe questions why he attended his event without invitation. “They pleaded me to attend the event, that’s why I came” Balaji replies. When Joe Michael asks him to reveal who pleaded him, Balaji says that he is ready to face the issue legally.

Now, in the latest six minute audio that was leaked Joe Michael says to Balaji that he was talking about something that was telecasted. “I am not talking about that didn’t telecast.” Joe Michael says and demands him an explanation. However, Balaji partially denied Joe’s allegations and said that he didn’t use the name of Joe michael.

“I know what happened. I will face it legally. That’s why I didn’t reply anything. I never defamed you and I know what happened” Balaji adds. However, Joe Michael insists Balaji to prove in social media about what he said inside the Bigg Boss house. “You said that you have proof against that organisation. Show the proof” he could be heard asking.

“I know I am a victim in this whole scenario and I will face it legally” Balaji replied and also made sure that he is not in the idea of asking apologize to Joe Michael. Here’s the audio that was leaked :

Earlier, Joe Michael who owns the company, issued a legal notice demanding an unconditional apology or to pay compensation of rupees one crore. He also shared the screenshot of sending legal notice to Balaji in Whatsapp. Later, he came up with a phone call audio conversation of himself and Balaji.

Balaji Murugadoss is super active in Instagram since coming out of the Bigg Boss house. He has been sharing the videos of children uttering his name when they are asked to tell their favourite contestant in Bigg Boss season four. After thanking his fans for having his back while he was staying inside the Bigg Boss house, Balaji also conducted a live for his fans in Instagram.

Previous article“It Is Heart Breaking” – Fans After Knowing About This Decision Of “Master” Crew !!
Next articleSamantha Opens On Handling Social Media Trolls !! WATCH

Vignesh Shivn Raised Voice For His Girlfriend Nayanthara Against The Misogynist Comments Of Radha Ravi !!

Starting his speech with thanking the Internet, Radha Ravi mocked the actors of Kolayuthir Kaalam for not attending the press meet function and asked...