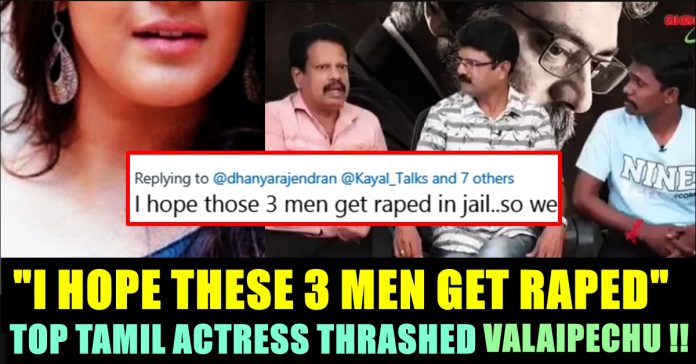 Team Valaipechu is facing the wrath of public and Tamil cinema celebrities for the comment they made about the female characters featured in Nerkonda Parvai, remake of bollywood sensation Pink. As soon as the movie released, reviews kept pouring from all directions of Internet but the review of Valaipechu received special attention for all the wrong reasons.

Valaipechu, a popular youtube channel deleted their Nerkonda Parvai’s review due to the waves it created. Having 3 men as reviewers, Valaipechu channel often caught in controversy for their statements. In the Nerkonda Parvai movie review, they said that the film had flaws in portraying the female leads. “Girls in the movie are showed as they belong to upper class. They are losing virginity multiple times and getting drunk in pubs and bars. At one point we couldn’t feel pity for them. We couldn’t care for whatever the injustice (such as rape) happens to them. This might be relatable for the audience of North India but when it comes to Tamil audience, it is not relatable” they said in their review.

“Girls Going to pub and having sex with boys is very much casual in NORTH but not in South” says these Tamil reviewers. #NerKondaPaarvai

This particular statement from their review earned the outrage of top celebrities including actor Siddharth and Director P.S Mithran. For Their Cheap Comments On NKP Girls, Valaipechu Team Getting Thrashed By Celebrities !! WATCH VIDEO !! Actress Varalakshmi Sarathkumar, who is known for the roles she played in Sarkar, Poda Podi expressed her anger through her official twitter account. The actress who always raised voice against the injustice of women, in her tweet said, “I hope those 3 men get raped in jail..so we can say..hey we dont feel sorry for you..we jus dont feel like caring..because you asked for it by opening you big damn mouths…and calling it a review..please shut ur mouths..#ShameOnYou #insensitice #ignorant”

I hope those 3 men get raped in jail..so we can say..hey we dont feel sorry for you..we jus dont feel like caring..because you asked for it by opening you big damn mouths…and calling it a review..please shut ur mouths..#ShameOnYou #insensitice #ignorant

She also added few more tweets to express her emotions in this issue :

Hahahhaah…they are not even worth a single tweet bcos that just means more people will watch their nonsensical so called review..my god how backward are these people..?? Are you serious..?? You dont care what happens to girls just bcos they are outgoing..?? *****#####*****

This is what happens when everybody in the world wants to review movies..first think whether you understand a movie before you review it..go review your own life..I’m sure people can watch a movie irrespective of your damn useless reviews and talking crap about women..

I jus saw this nonsense … this is our constant battle..!! Men and women who think this way.. girls wearing western clothes and outgoing girls deserve it.. how backward are they..?? Do they even realise the meaning of rape.!?? Or abuse..??

Varalakshmi also thanked the Valai pechu team for realizing the mistake after they deleted their review :

Thank you.. I appreciate that you have atleast realised your mistake and taken it down..

Kamal Haasan returns as a host yet again for the reality show, Bigg Boss Tamil 3. The much-anticipated reality show kick-started on a high...

“He Used To Call Me As Akka” – Aspiring Model Saranya About Prashanth, A Celebrity Photographer