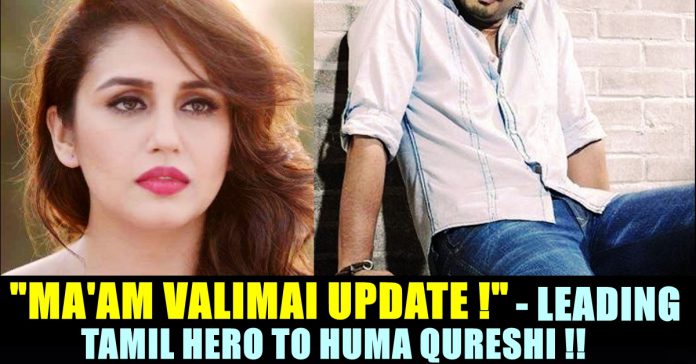 Since the release of Ajith kumar’s “Nerkonda Parvai”, fans of actor Ajith didn’t see a single release. The film got released on 8th of August 2019 and did good at the box office. However, the limited number of action sequences that took place in the court room drama made fans to crave for the next film of him. It was announced that director H. Vinoth is going to direct Ajith again and fans became happy as the filmmaker is known for his intriguing narratives.

Titled as “Valimai”, the film is being produced by Boney Kapoor under his production banner “Boney Kapoor production”. Principal photography of “Valimai” began on 13 December 2019 at Hyderabad. Unfortunately, shooting of the film was suspended in March 2020 due to the COVID-19 pandemic, but resumed in September. It was reported that Valimai is going to get released by the third week of November 2020 coinciding with Diwali. However, the release has been delayed indefinitely due to the COVID-19 pandemic.

Fans of the actor who are eagerly waiting for the release of the film got extremely upset and requesting for a trailer or teaser update from the film crew. They could be seen expressing their emotions in the comment section of every tweet of the producer. They also kept asking update from the makers by trending hashtags in the micro blogging social media site in a constant manner.

Acclaimed celebrities and sports personalities started receiving “Valimai Update” demands from the fans of Ajith kumar. Recently, when Prime minister Narendra Modi made a visit to Chennai, fans asked “Valimai” update to him and it is also notable that they made similar demand to Tamil nadu chief minister during one of his election campaigns.

On 15th of March, producer Boney Kapoor came up with a tweet saying that the Valimai updates will surfaced from the birthday of Ajith kumar. “The first look and the promotions of #Valimai will be initiated from May1st on the occasion of Mr #AjithKumar’s 50th birthday #AK50” tweet of Boney kapoor read.

The tweet came from him after BJP candidate Vanathi Srinivasan promised to give Valimai update to Ajith fans after getting voted to power. Now, South actor Siddharth who is known for acting in quality films, made Valimai update demand to actress Huma Qureshi who is playing female lead in the film.

The actor who is pretty much active in social media platforms, recently uploaded a picture of himself posing with a wide smile in his face. “Planning a wfh all-nighter after some superlative coffee at the beautiful @coffeesince1999 Hands down the best Americano in Chennai!” his caption for the post read.

Along with fans many celebrities including Parvathy, Khushbu, replied to the post of Siddharth. Actress Huma Qureshi who debuted to Tamil through Rajinikanth’s “Kaala” and acts predominantly in Hindi, also commented on the post by writing “Noooo”.

Replying to her, Siddharth wrote “ma’am #valimai update!” and left most of his followers in splits.

Check out the screen shot of his reply :

Check out some of the reactions he received for this reply of him :

On the work front, Siddharth who was last seen in “Aruvam”, is all set to appear in “Takkar”, “Shaitan Ka Bachcha”, “Indian 2”, “Navarasa” and “Maha Samudram”.

Previous articleWhy A.Raja Asked Public Apology ?? Music Director James Vasanthan
Next article“Yes I Was 13 Years Old While Acting As A Heroine In That Film” – Simbu’s Heroine Opened For The First Time

“We Are Facing Issues Like Pollachi Rape Case, Do This Movie Really For Youths?” Prashanth Bashed IRIR Movie Crew !!

Actress Anaswara Rajan who is known for her work in "Thanneer Mathan Dinangal" film, recently found herself amidst hateful comments for a picture she...