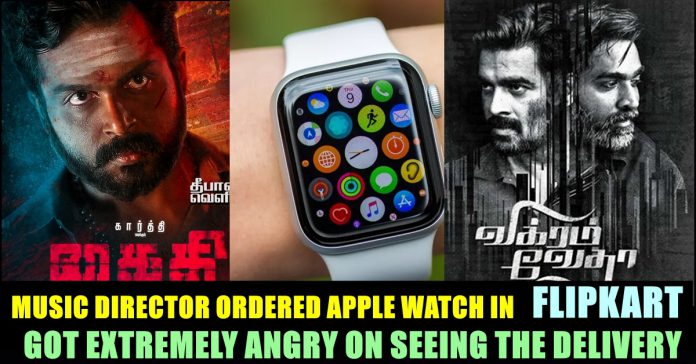 Orders getting misplaced in online delivery platforms became common nowadays. We have seen instances where people getting expensive products worth thousands from online delivery platforms after ordering simple products worth rupees few hundreds. But in this case, emerging music director Sam. C.S who composed music for blockbuster films such as “Vikram Vedha”, “Adana Maru”, “Kaithi” has complained against Flipkart saying that they cheated him.

Sam CS debuted in Tamil with the horror film Orr Eravuu before working on the scientific thriller Ambuli. The musician is active in the micro blogging social media platform with 1 lakh plus followers. Recently, he posted a tweet complaining against Flipkart, an Indian e-commerce company based in Bangalore, Karnataka, India.

Sam, after planning to gift his brother an Apple watch, ordered it in Flipkart and sent to him. The duo got shocked on seeing a beautifully packed stones instead of watch in the delivered package. The company refused to refund the money to the film musician after he raised a complaint. Sharing the news to his 1 lakh followers, Sam requested them not to buy anything from Flipkart and called them as “Cheats”.

“I had sent an Apple Watch as a gift to my brother through Flipkart
And we were shocked when he received beautifully packed stones instead of the watch. When we raised the complain Flipkart, rejected our refund. Pls never buy from #Flipkart again. They’re cheats.#flipkartfraud” his tweet read.

I had sent an Apple Watch as a gift to my brother through @Flipkart And we were shocked when he received beautifully packed stones instead of the watch. When we raised the complain Flipkart, rejected our refund. Pls never buy from #Flipkart again. They’re cheats.#flipkartfraud pic.twitter.com/oGt2E6olph

“Sorry to hear that. We understand your concern about the order. Please share the order ID via DM by clicking the below link so that we can assist you accordingly.” replied Flipkart to receive a reply from a Twitter user who said “okay , he is a celebrity so you are taking further action , because they have posted bad about you, if an ordinary person faces this kind of problem means you are not responding”

okey , he is a celebrety so u r taking further action , becoz they have posted bad about you, if an ordinary person faces these kind of prblm means u are not responding , #Flipkart

Check out some of the other reactions Sam’s tweet received :

It's Can't Pair with Device.. and they not Replacement the product..😰😭😭 #flipkartfraud #Valimai pic.twitter.com/Toca5naziX

Bro recently I have faced the same issue… This is very bad from Flipkart.. This is completely not acceptable from such a big company….