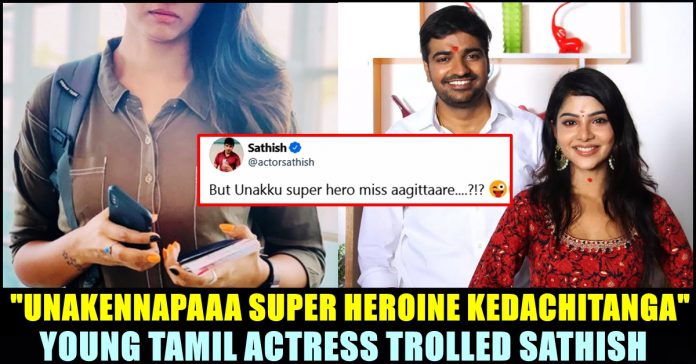 Actress Priya Bhavani Shankar, one of the busiest actress in the Tamil film industry teased actor Sathish for pairing up with “Cooku with Comali” fame Pavithra Lakshmi after he commented on one of her recent posts. The actress said that he got a “Super heroine” for his film after Sathish jokingly said that Priya is feeling bad for not pairing up with him.

Comedy actor Sathish who has been a part of many successful movies, is venturing as a protagonist for the first time in AGS Entertainment’s 21st film. Pavithra Lakshmi of “Cooku with Comali” fame is going to play the role of lead lady in the film of the “Bigil” producer. George mariyan of Kaithi fame, Music composer Ganesh, Ilavarasu, Livingston, Gnanasambanthan and Sriman are going to play the supporting roles in the film. A debutant named Kishore Rajkumar is going to direct the movie by writing the screen play, dialogues and story.

With Sivakarthikeyan appearing as a guest, many celebrities wished Sathish and the makers of the film for a success. Most recently, actress Priya Bhavani Shankar who is known among Tamil audience through her serial and cinema stints, came up with a Twitter post with a caption saying “What am I thinking”

In the picture she looked gorgeous in the Beige colour satin saree with ruffled sleeve blouse and was elegantly posing for the camera with a warm smile. Check out her post below :

What am I thinking 🤔🤨 pic.twitter.com/96YXo0d9MW

Replying to the caption of her, Sathish said that Priya is thinking about not pairing up with him in his upcoming movie. “Sathish kooda heroine aa nadikka mudiyaama poche….” his reply read.

Countering his comment, Priya said that he doesn’t have to worry about anything as he is going act with a “super” heroine. “Unakennapppaaa supera oru heroine kedachitaanga”

“But you missed a super hero” replied Sathish by writing “But Unakku super hero miss aagittaare….?!?”

Priya quoted one of his replies and uploaded a picture of Sathish’s lady get up which he wore for the film “Tamizh Padam 2” and trolled him.

Sathish challenged Priya to compete with his Lady get up and the actress replied accepting her defeat in a sarcastic way.

Priya Bhavani Shankar made her entry into media industry as a Television News presenter in Tamil Puthiya Thalaimurai News Channel. She became very popular after started acting in serial named “Kalyanam Mudhal Kadhal Varai” which got telecasted in Star Vijay Television. She got debuted in Tamil film industry through “Meyadha Maan”. The actress who gained many fan pages in social media platforms in a very short span, has a separate set of fan following for her acting and screen presence. So far she paired up with Vaibhav, Karthi, SJ Surya and Arun vijay. She is committed in Indian 2, Oh Manapenne, Kuruthi aattam, Bommai, Kasada Thabara and Kalathil Santhippom.

Tamil Fans Got Extremely Upset On Seeing This About Dhanush !!

On seeing Dhanush being mentioned as "Bollywood" star, fans of Tamil cinema got extremely dejected and expressing their emotions in social media platforms. They...

India became the third most affected country in the world, as far as the COVID 19 virus is concerned. Overtaking Russia on Sunday, India...

While interacting with her followers through a question and answer session, young and emerging heroine Parvathi nair responded to a follower who predicted her...