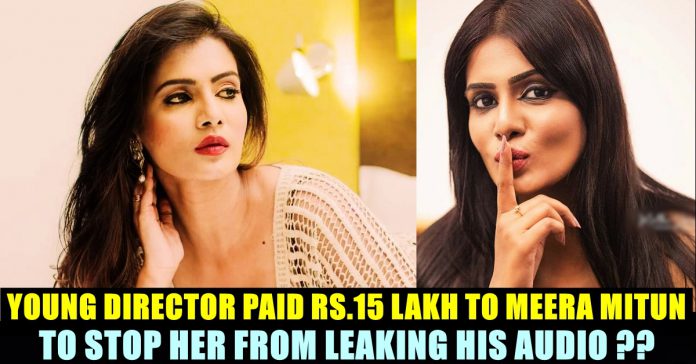 Since the controversial tweet which said that Meera Mitun got passed away surfaced in her official twitter account, the actress hasn’t got involved in any kind of online activity. When media channels approached the mother of the actress about the tweet, she said that she doesn’t know the whereabouts of her daughter and started crying. Now, a latest update of Valaipechu hinted that Meera Mitun has received Rs.15 lakh from a filmmaker to restrain herself from leaking a phone call audio of him.

If you are aware of Bigg Boss show’s third season in Tamil, you must have known about Meera Mithun , a most talked about participant of it. One of the highly controversial episode of the season is undoubtedly the one in which Meera Mithun accused Director Cheran of physical harassment.

After accusing Director Cheran for physically assaulting her, Ulaganayagan Kamal haasan for nepotism, Superstar Rajinikanth for promoting himself during COVID 19 pandemic, Trisha and Nayanthara for copying her style, actress and model Meera Mitun, recently said that she is going to stop Kamal Haasan from hosting the 4th season of the Bigg Boss show. For past few weeks, she abused actors Vijay, Suriya and the wives of the actors.

Now, movie journalists of Valaipechu youtube channel, hinted that the actress received Rs.15 lakh from a leading producer to restrain herself from leaking a phone call audio which was recorded years before. Bismi said that the actress he is mentioning became famous by abusing actors in Twitter platform.

“People came to know about her character only now. Initially, some of the leading filmmakers thought that she is one of the upcoming actresses and poured love on her through phone call. She recorded a phone call of this young leading filmmaker who poured so much love on her. Recently, the actress let him hear the audio and terrorized him. To stop her from leaking the audio, the filmmaker gave her Rs.15 lakh.” Bismi said in the video which was released in his youtube channel Valaipechu.

As soon as the video released, Netizens are speculating on who the young leading filmmaker could be. Being a model, Meera Mitun is trying hard to grab a place in Kollywood as heroine. So far she did minor roles in films such as 8 Thottakkal and Thaana Searntha Kootam which were directed by Sri ganesh and Vignesh Shivan respectively.

Previous articleBJP’s Vinoj Selvam Released 8 Years Old Video Of Karthi !! WATCH
Next articleRemember Vaishnavi From BIGG BOSS 2 ?? Check Her Reply To A Random Insta User Who Asked About Her Pregnancy

Old Tweets Of Experts About Tewatia’s Innings Are Getting Trolled Now !!

Everything including Mayank Agarwal's century, The third best opening partnership between Mayank Agarwal and KL Rahul in the history of IPL, Nicholas Pooran's terrific...