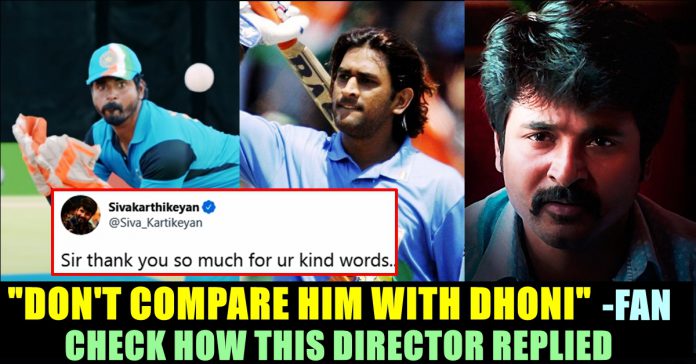 “If You Want His Call Sheet, Ask Him Directly” Fan Criticized !! Check This Director’s Reply

As soon as former Indian captain Dhoni announced about his retirement from International cricket, entire country including politicians, sports personalities and cinema celebrities reacted to it in a way of wishing the cricketer for a best future. Though the cricketer has planned to continue playing for Chennai Super Kings in IPL, the emotional messages he received from fans are immense.

“Thanks. Thanks a lot for ur love and support throughout.from 1929 hrs consider me as Retired” Dhoni wrote in his post which was uploaded on Saturday.

MS Dhoni earned enormous number of fans as he loves outsmarting the opposition with his quick thinking, innovative field settings and clever bowling changes. Known for his calm and composed nature, MS Dhoni has gained a nickname “Mr.Cool” for keeping himself calm in the field, unlike other captains.

The post he uploaded in Instagram lately consists a 4 minute 7 seconds long video of the journey of the cricketer from the very first match of him till the last match he played.

From Tamil nadu Chief minister Edappadi K Pazhaniswamy to current Indian captain Virat Kohli, everyone posted tweets pouring their love towards the cricketer. Among many of them, Sivakarthikeyan of Tamil cinema also wished Dhoni for his retirement. He thanked Dhoni for all the entertainment he gave the people of India all these years.

“Big thanks to you for inspiring and entertaining us to the max.. you are always an amazing Leader dear MS Dhoni.. I’m sure u wil hv different strategies to amaze us.. waiting for ur next helicopter shot” said Sivakarthikeyan in his tweet.

Big thanks to you for inspiring and entertaining us to the max.. you are always an amazing Leader dear @msdhoni ..I’m sure u wil hv different strategies to amaze us.. waiting for ur next helicopter shot💪👍 pic.twitter.com/8Ua43F3CJ9

On seeing this tweet from Sivakarthikeyan, Director Seenu Ramasamy who is known for directing films like Vijay Sethupathi’s “Dharmadurai”, “Thenmerku Paruvakaatru”, replied by comparing Sivakarthikeyan and Dhoni. He said that both of them came from scratch and giving opportunities to newcomers. He said both of them blossomed from bottom.”Started as a small screener to Silver screen star Sivakarthikeyan, you also inspiring entertaining mostly giving opportunity for newcomers and friends in your own ground like MS Dhoni.From bottom you both blossomed.” Seenu said in his tweet.

Started as a small screener to Silver screen star @Siva_Kartikeyan you also inspiring entertaining mostly giving opportunity for new comers and friends in your own ground like @msdhoni. From bottom you both blossomed.” https://t.co/leENEiARjM

An excited Sivakarthikeyan posted a “Thanks” tweet saying that his words are motivating him so much. “will work more harder, will improve myself to be a better person and a better actor, means a lot to me sir” the actor replied.

Sir thank you so much for ur kind words..Tis s motivating me..wil work more harder,wil improve myself to be a better person and a better actor👍🙏😊means a lot to me sir😊 https://t.co/Cz6Ri9nuKB

However, a fan criticized the filmmaker by saying that he is trying to get the call sheet of Sivakarthikeyan by praising him. He said that these kind of comparisons makes fans to fight with each other to which Seenu Ramasamy said that everyone who are coming from bottom are Dhonis. The filmmaker said that it is not for call sheet but a mark sheet for Siva.

Those who came up with out yard stick with out big support with their own struggle all are dhonies so Capt dhoni was an example for all.if some body prizing that
you living like your father.what is the meaning of motivation. This is not for his callsheet. It may be marksheet

On the work front, Seenu Ramasamy is busy making “Maamanithan” with Vijay Sethupathi whereas Sivakarthikeyan is all set to appear in “Doctor” and “Ayalan”. It is notable that Sivakarthikeyan acted as a failed cricketer in “Kanaa” which was made under his own production.

Comment your views on Sivakarthikeyan being compared with Dhoni !!

Krishna Devi, a junior artist who has been part of Tamil cinema for more than thirty years, has accused director Atlee of verbally abusing...