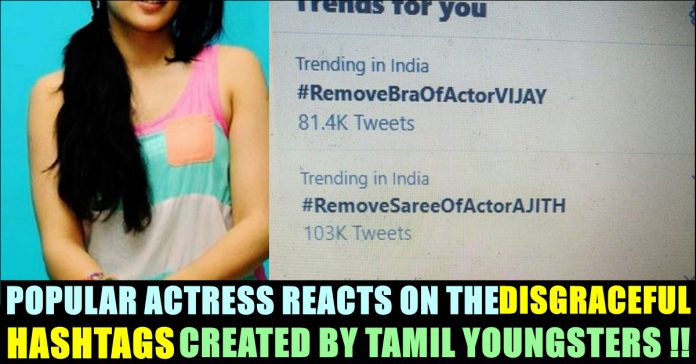 We are less than 50 days away from the year 2020, the year in which Dr.APJ Abdul Kalam wished India to become a developed country among the world countries. The belief in youngsters is the major reason behind the dream of the former president who hailed from state Tamilnadu. But the youngsters of the state are currently working on something else it seems.

Though the actors are enjoying a healthy friendship between them, verbal spats between their fans is taking place in many occasions, especially when their movies are getting to release simultaneously. Then it took place in movie theatres but now as social media became an easily accessible one to every smartphone users, they started to abuse each other through hashtags to prove who has the strongest fan base.

Yesterday the hashtags “Remove Saree of Actor” Ajith and “Remove Bra of Actor” Vijay trended nationwide and grabbed the attention of the whole country. Though the hashtags doesn’t make any sensible meaning, it was tweeted by most number of people who belong to the fans community to make them as trending hashtags.

This is not the first time that such hashtags are trending nationwide as we have witnessed these kind of disgraceful hashtags trending nationwide many times. Ajith & Vijay Fans Degrading Each other To The Core !! National Level Shame !! Now on seeing these hashtags, actress Taapsee Pannu who is known for acting in films like “Aadukalam” “Aarambam” has reacted in her official twitter account only to let know more people.

The actress who nearly has 40 lakh followers in Twitter, asked “What the hell happened here !!! 🤨 🤯🤔”. Check out her tweet here :

Not only Taapsee, many of the people from Tamilnadu who are using Twitter, embarrassed on seeing such kind of activity from a large number Tamilnadu youngsters.

The real disgrace to Tamil language, Tamil industry & Tamil heritage is this Vijay and ajith fans.

Fans of Ajith and Vijay who are contributing to these disgusting trends, you are a disgrace to the state of Tamil Nadu. Thala and Thalapathy would never ever be proud of such idiots.

These Vijay-Ajith maniacs are total disgrace to humanity. Every other week they come up wit some sexist, homophobic, regressive, problematic n vile hashtags embarrassing themselves

Ajith Vijay -do something!

Despite of Vijay’s speech in Bigil audio launch where he asked his fans to use hashtags for social causes and Ajith’s dialogue about disgracing others in “Nerkonda Parvai”, fans of them are not in the mood to listen it seems. It is also raises a question about if they are actually the fans of their idol or a mere haters for his rival.