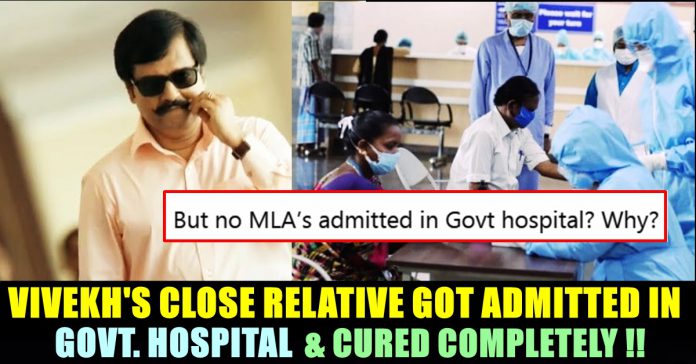 Irrespective of age, gender and class COVID 19 is slowly infecting people we know. Recently, the most influential Bachchan family of Indian cinema, tested positive for the virus. Shocked by the news, their colleagues, well wishers and fans are praying for their speedy recovery. Now, actor Vivekh has reported that one of his close relative got affected by COVID 19. The Tamil comedy actor who updated that his relative got cured now, surprised his followers by saying that he got admitted in a government hospital. He also lauded Tamilnadu government and health minister Vijaya Baskar for their quality treatment for COVID 19 patients in government hospitals.

Not many days ago, we heard a news on Director Majith who directed actor Vijay in his 2002 released movie “Tamizhan”, got admitted in Vijaya private hospital and was forced to pay more money while getting discharged. When Majith’s wife asked how much money it would require for the treatment, the hospital management reportedly said that it will be Rs. 2.80 lakh initially. After the filmmaker responded well to the treatment and recovered from the deadly disease, the hospital management demanded more many from the family of the filmmaker.

At the time of discharge, the bill came up to Rs. 4.85 lakh which was way more than what the family of the filmmaker expected. When Majith’s wife raised question against the overcharging, the hospital management reportedly said that the amount will increase if they fail to pay it on time. However, Producer Kotapadi J Rajesh of KJR studios, came forward and settled the amount and helped Majith to get a proper discharge. Majith who thanked Rajesh for his timely help, stated that he got recovered from the virus.

Not only Majith, almost all the cinema celebrities would prefer private hospitals to get treatment, no matter much they charge. Now, this tweet from actor Vivekh who is known for his socially responsible activities, has given public people a solid hope towards government hospitals as he said that his own brother-in-law got cured by their proper treatment.

“Due to Corona, my brother-in-law had breathing problem and fever and got admitted in Omandurar government hospital. In just 10 days, he got completely cured. It is a hospital with simple place but efficient medical facility and treatment. I heard that he received quality food there. I thank Government doctors” Vivekh wrote in his tweet by tagging Health Minister Vijayabhaskar, IAS officer J Radhakrishnan and Doctor Ramesh.

Followed by this tweet, many of his followers shared their own experience with Government hospitals in Tamil nadu. Few even questioned why MLAs and ministers are not getting treatment from government hospital. Check out them below :

I am 59 years old and got affected by covid 19 last month. I got cured in just 6days at KMC hospital with best medical attention from both doctors and nurses. Govt. Hospital is the best for Corona treatment. Keep up the good work TN govt.

Yes. Treated separated and special care for VIPs. I was also faced lot of difficulties in Tanjore without any support and care. I was buying tablets outside and getting food from home . No Care at all

But my friend admitted in bharath medical college which is under govt hospital control, there no proper treatment was given and now he is critical & moved to private hospital.
Govt should look into all other locations.

But no MLA’s admitted in Govt hospital? Why?

Previous article“I Can Bear The Expenses Of Your Daughters” – Producer Ravindran
Next articleHip Hop Tamizha Replied To The Comedians Who Made Fun Of His Songs ??

The most anticipated Saturday's episode streamed yesterday and as usual Kamal Hasan excelled in his own way throughout the show with his observation throughout...