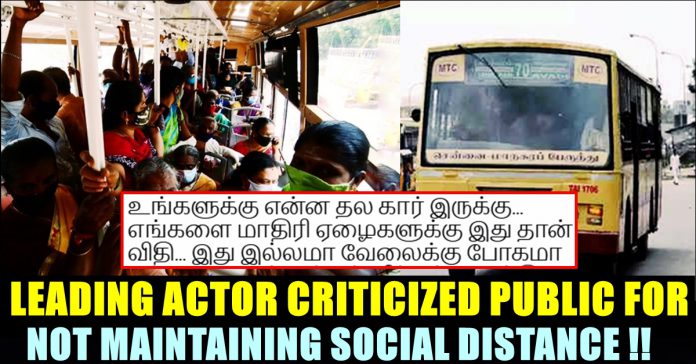 On the second day of MTC bus service started resuming in Tamil nadu, social distancing went on toss among the citizens who travelled in the MTC bus of Chennai city. Many of the buses ran to full capacity, and some commuters were also sent standing as all the seats were occupied. Among the many chennai based Internet users, leading comedy actor Yogi babu shared the picture and expressed his disappointment over people’s ignorance.

A picture of one such MTC bus heading from Tirunindravur to Broadway and flouting physical distancing norms was spotted on Padi flyover. All the passengers in the bus were seen wearing masks as a safety precautions but the bus was fully packed. A senior citizen who was waiting for bus in the Lucas bus stop said that most of them were office goers. He said that more MTC buses should be operated. He is also expecting Deluxe buses to close doors once 24 passengers boarded in it.

While resuming the MTC bus service, Transport minister M.R Vijayabaskar said that only 32 passengers are allowed in mofussil buses and 24 passengers in MTC buses. “Patronage is expected to increase gradually and simultaneously, the number of buses operated would also be increased” he said.

The Metropolitan Transport Corporation has a strength over 3,600 buses and operates on over 360 routes. On an average, 36 lakh passengers, used to travel by the MTC buses per day. An MTC bus conductor who worked after the resume said that only one passenger is allowed to occupy a seat. “Once 24 passengers boarded the vehicle, we ask others not to get it but some commuters who are waiting for a long time are getting agitated and starts arguing with us” he said.

A view of an MTC bus in #Chennai near Padi junction on Tuesday, on day 2 of the resumption of public transport services #unlocktn
Photo: K. Pichumani/The Hindu pic.twitter.com/aFMnyTRU0B

“Some even go to the extent of damin the vehicle. Some of them throwing stones at the vehicle has been reported in other districts on Wednesday” he added. “It would be helpful if some police officials are posted at important bus stops during peak hours. Only they can regulated the crowds” he wished.

On seeing people thronging in a single bus, along with many people, comedy actor Yogi Babu posted a tweet sarcastically saying “Super”

For this post, the “Darbar” actor received mixed reactions from his followers. Some criticized the comedy actor saying that he owns several cars but poor people would be able to travel only in this way. Check out some of their reactions below :

Previous articleFans Thrashed Kedar Jadhav For His Indirect Attack On Suresh Raina !!
Next articlePUB-G Got Banned Along With 117 Others Apps !! Full Details Here