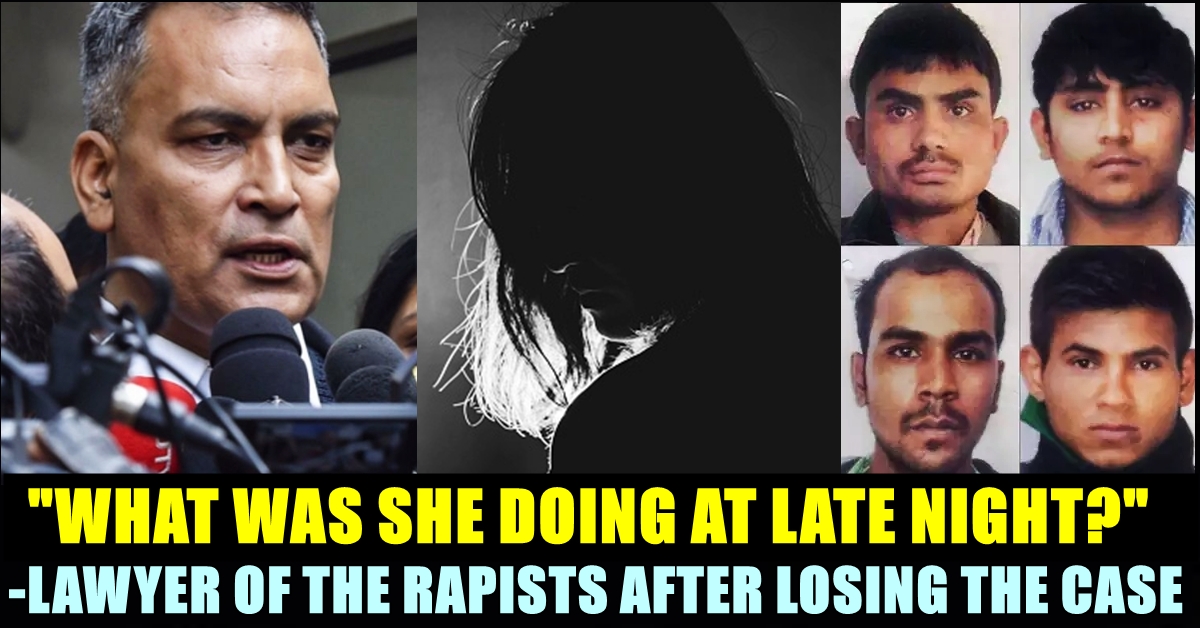 This is the first time that four men have been hanged together in Tihar Jail, South Asia’s largest prison complex that houses more than 16,000 inmates. The executions were carried out after the men exhausted every possible legal avenue to escape the gallows. Their desperate attempts only postponed the inevitable by less than two months after the first date of execution was set for January 22. They were hanged at 5.30 am, Director General of Prison Sandeep Goel said. Among the 6 accused, Ram singh allegedly committed suicide in the Tihar jail days after the trial began in the case, a juvenile was released in 2015 after spending three years in a correctional home.

Now, to our shock, the Lawyer who defended the four accused, has questioned the character of victim after losing the case. Named as AP Singh, the lawyer’s statement about Nirbhaya’s character created outrage among the people who are following the case. While talking to media, A P Singh questioned the character of Nirbhaya and said that one should also ask her mother why was she out for so late and along with whom ?

AP Singh gave his everything to save his clients from getting hanged but justice did what it required to do. The lawyer’s controversial statement is trending in internet with angry reactions. Watch the video below :

“Should I not ask what the girl was doing with the boy so late at night? It is part of the evidence. I wasn’t saying they had a brother-sister relationship or they were out to celebrate rakhi. All I said was that they are friends. Now in their society, boyfriend-girlfriend relation must be laudable, but not in the culture I come from,” the Lawyer told the media.

The lawyer confronted the decisions of court in previous occasions as well. “If the Court can’t put stay on Death punishment of these 4 innocent people, they should hang me too. I can’t live without them,” said Singh after Supreme court dismissed the petition of death row convict Pawan Gupta against the rejection of his mercy plea by the president.

In 2013, Singh’s views led outrage as he openly attacked the judge in courtroom, after losing the Saket court. “You have not supported truth but lies. This decision has been taken under political pressure and for vote bank politics.” he said at that time.

His recent statement against the victim’s character made people to criticize him which is evident through social media platforms. “If my daughter or sister engaged in premarital sex and disgraced herself and allowed herself to lose face and character by doing such things, I would definitely take her to my farm house and would set fire on her, in front of my entire family” he said in his statement.

Meera Mitun Complained To Narendra Modi About Her Photos Being Morphed !!
Cab Driver Cried In Front Of “Moodar Koodam” Naveen !! Check What He Did !!