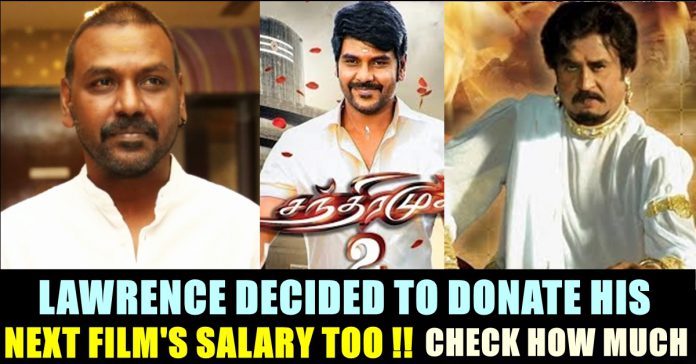 Raghava Lawrence who said that he has been receiving calls and videos of people requesting him to help them from various fields, has made his next announcement about his donation for the well being of poor and needy. After donating a whopping amount of Rs. 3 crore as a relief fund for coronavirus disease, Raghava Lawrence, a renowned actor, director, dance choreographer came up with a long note explaining what happened to him on 11th of April. In that note, Lawrence said that he is getting so many calls from fighters union and from assistant directors and from many others asking him to extend his contribution. The actor who got dejected has said that he will make an announcement soon regarding the extension of his contribution after discussing with his auditor.

Now, in his recent post, Lawrence redirected a part of his salary amount for one of his upcoming films to the sanitary workers. Lawrence is committed to work in a movie with Five star creations in near future. When Producer Kathiresan, owner of Five star creations, called Lawrence to wish him on for Tamil new year. While talking Lawrence requested Kathiresan to credit Rs.25 lakhs from his salary to those who work for the cleanliness of our nation. “Without expressing the struggles they are facing while cleaning the garbages we make, sanitary workers are working hard even at this time. I decided to help them next. I request you to credit Rs.25 lakhs directly to their bank accounts” asked Lawrence to Fiverstar Kathiresan.

Accepting his request, in the press statement, Five star Kathiresan announced that he will credit the money and said that he feels proud to work with a good hearted person like Raghava Lawrence. It is notable that Lawrence 3 crores donation is also a part of his salary to act in the sequel of Chandramukhi 2.

“Hai friends and fans, This is a very crucial time for all of us. I will try my level best to serve the needy without any expectation. God is within everyone, Service is god.” said Raghava Lawrence while sharing this post in his official twitter account.

Hai friends and fans, This is a very crucial time for all of us. I will try my level best to serve the needy without any expectation. God is within everyone, Service is god. pic.twitter.com/fsGSPynAw3

Among the initial 3 crores, Raghava Lawrence said that he is going to donate 50 lakhs to PM cares, 50 lakhs to CM relief, 50 lakhs to dancers union, 25 lakhs to physically abled boys and 75 lakhs to the daily labour’s and for the people from his birthplace Royapuram, Desiyanagar.