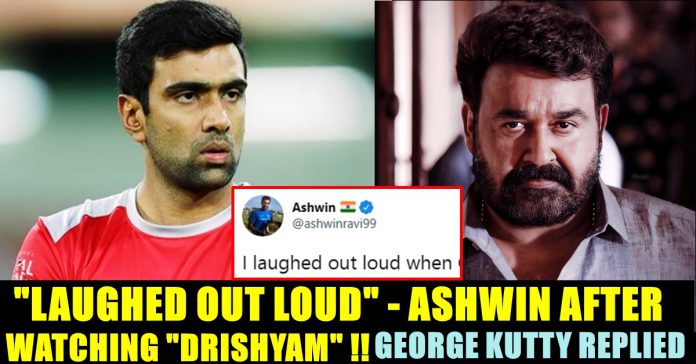 Ahead of playing the third test against team England at Ahmedabad, Tamil nadu based Indian all rounder Ravichandran Ashwin watched the recently released Drishyam 2 of Mohan Lal and uploaded tweet recommending it to the online users. He asked his followers to watch it from the first part and mentioned his favourite moment of the film. To his surprise, Mohan Lal who played George Kutty immediately replied by thanking him for watching the film amidst his busy schedule. The duo’s exchange garnered huge reception from the fans of cricket and cinema.

Along with the fans, many celebrities from the film industry are also appreciating the filmmaker and Mohan lal for the way they made the film. Ravichandran Ashwin who received Man of the match award in the last test match he played against England, watched the film and appreciated it by posting a tweet.

The cricketer said that he laughed out loud when George Kutty created a twist in the court and asked his followers to watch the film from the first part if they didn’t. “I laughed out loud when George Kutty @Mohanlal created that twist in the court #Drishyam2 . If you guys dint, please start all over again from #Drishyam1. Fabulous!! Just fabulous” tweet of Ashwin read.

I laughed out loud when George Kutty @Mohanlal created that twist in the court #Drishyam2 . If you guys dint, please start all over again from #Drishyam1. Fabulous!! Just fabulous👏👏👏👏

Replying to this tweet of Ashwin, Mohan Lal said that the tweet he posted after watching the film amidst the busy schedule means a lot for the team “Drishyam”. He also wished the best for his career. “Thank you for taking time out of your busy schedule to watch our #Drishyam2 and talking about it. Means a lot to all of us .Best wishes for your career @ashwinravi99” Mohan Lal said in his reply tweet.

Thank you for taking time out of your busy schedule to watch our #Drishyam2 and talking about it. Means a lot to all of us .Best wishes for your career @ashwinravi99 https://t.co/kgMcfyOWwA

Ashwin got excited on seeing the tweet of Mohan lal and immediately replied to it mentioning his pet name, in a way of expressing his love.

Have you watched Drishyam 2 yet ?? If yes, comment your opinions on below.

Tamil Actors Got Criticized For Not Casting Their Votes !!

Tamil cinema celebrities including Superstar Rajinikanth getting criticized for not casting their votes in the local body elections that took place on 19th of...