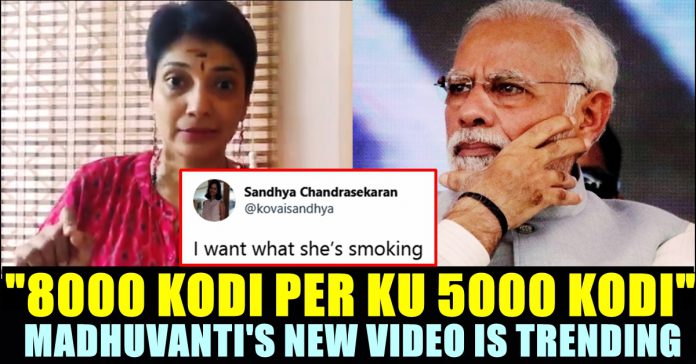 A latest video of actress Madhuvanti stating numbers regarding Prime minister Narendra Modi’s rescue operation due to this corona crisis has instigated severe trolls and memes against her. Madhuvanti who is known for acting as Police officer, is a daughter of famous actor and dramatist Y.G. Mahendran. Last time she came up with a videostated few scientific reasons behind Prime Minister Narendra Modi’s Diya challenge.

“Through Jan-Dhan scheme, Government of India has credited Rs. 30,000 crores for the people of India. On Saturday, among that 40 percentage of Rs.30,000 crores which is Rs.20,000 crores of money has been credited to women. This is an authentic information from Times of India, I request you all to read” she said in her video.

“Like wise, through Ujjawala scheme, Rs. 5,000 crores of money has been credited to the bank account 8000 crore people to register gas for next three months.” she said who also added that a sum of Rs.3,000 crores has been credited to senior citizens, physically challenged people. She says that all these bank transactions are possible only through Aadhar card. “These schemes are implemented during Narendra Modi’s previous term of 5 years” she says in her video.

This 4 minutes long video of Madhuvanti is going extremely viral across the Internet. The way she confidently carried herself throughout the video amused few netizens. When the entire world population is 700 crore people, Madhuvanti says that Modi provided money to 8000 crore people which is not possible at all. She also said that 40 percentage to 30,000 crores in 20,000 crores which is completely wrong. It at all she had used a calculator or asked google, it would have helped her by answering 12,000 crores.

Check out how Internet is reacting to this video of Madhuvanti :

If I had the confidence levels of YG Madhuvanthi, I would have achieved so much more at this age.

Previous articleBIG BREAKING : Rajinikanth’s Blockbuster Film To Get A Sequel !!
Next articleYoung Hero Got Upset On Seeing This Comment !!

People of state Tamilnadu shocked as 110 new cases emerged in one day. It technically increased total positive cases of the state to 234....

A new meme content has been surfaced on Internet it seems. A recent picture of Parineeti Chopra and PM Narendra Modi is going viral where...