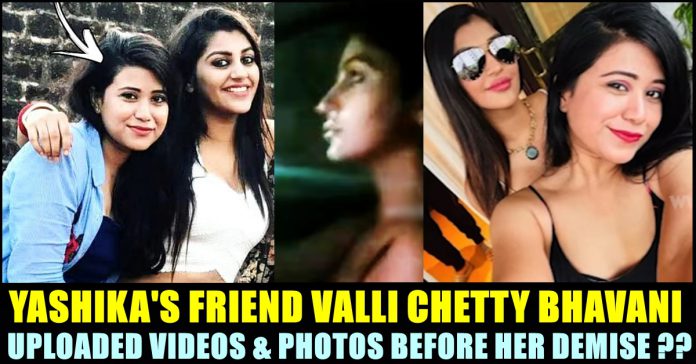 Popular film and television actress Yashika Anand is in critical condition after meeting with an accident that took place in the midnight on East Coast Road near Mahabalipuram. The actress’s’ friend who travelled with her died on the spot, according to reports. The car, reportedly swerved from its path and struck the median strip and the images of the damaged vehicle are doing rounds in social media platforms.

The deceased Vall Chetty Bhavani returned from the United Kingdom, a week ago and reached Chennai two days to meet her friends. The 28 year old was a software engineer by profession, says reports. Identities of the two men who were is the car is not known. The accident took place around 11 : 30 AM while they were returning from Mahabalipuram.

Bhavani suffered severe head injuries and her body was sent to postmortem to the Chengalpet government hospital. The Mamallapuram police have registered a case and are investigating. Cases for rash driving and causing death due to negligence were registered against actress Yashika. Bhavani had a flight to return UK on Sunday and they have decided to reach Chennai on the night itself. Police said that an examination had confirmed that the actress was not drunk at the time of the accident but could have lost control while speeding. Further investigations regarding the case in on.

Meanwhile, videos and photos of Valli chetty Bhavani are doing rounds in social media platforms. She had shared the videos of the trip in her official Instagram account. Uploading a video of Yashika driving the car, Bhavani wrote “She is my habibi” as her caption to the post, video of which is doing rounds in online platforms. She also uploaded a selfie picture of herself and Yashika and wrote “Love everything about you, the bestest”

Yashika Anand made her silver screen debut through “Dhuruvangal Pathinaaru” and rose to fame among audience through her Bigg Boss stint after gaining attention through a film named “Iruttu Arayil Muratu Kuththu”. After Bigg Boss, Yashika appeared in many reality shows, Her upcoming projects include “Raja Bheema”, “Kadamayai Sei”, Ivan thaan Uththaman” etc. Several celebrities has been posting tweets, praying for the speedy recovery of Yashika.

Rohit Sharma’s Six Hurted A Fan In The Stadium !! Here’s What The Vice-Captain Did After Match!!

As Captain Kohli said in the presentation ceremony, Rohit Sharma is having the tournament of his life. He added four world cup centuries to...

This Top Director Wants Cheran To Get Out Of BIGG BOSS House Right Now !! Check Out His Full Statement !!

Popular director Cheran is one of the contestants in the third season of the TV reality show Bigg Boss Tamil. The last film he...

It is very well known that North Korea is a country where rules and punishments are extremely strict under the dictatorship of Kim Jong...