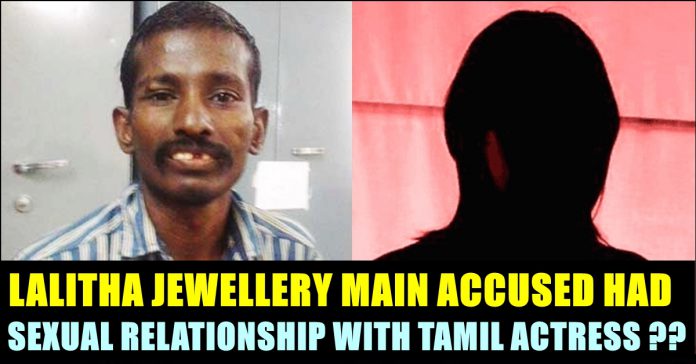 Lalitha Jewellery, a three-storeyed building near Chathiram bus Stand, was burgled after two-masked men entered the premises by drilling a hole in its wall. Chairman Kiran Kumar said jewellery worth Rs 13 crore was stolen from the store.

Earlier, a man was taken into custody regarding the case. The man identified as Manikandan was taken into custody at Thiruvarur. His accomplice Suresh managed to escape and surrendered on Thursday. The police have recovered 5kg of gold from Manikandan. On checking the gold bar code, it was confirmed by the police that the recovered gold was part of the loot that was stolen from Lalitha Jewellers.

Nine days after the Lalitha Jewellery store heist in Tamil Nadu’s Trichy, prime accused S Murugan (45), surrendered before a civil court in Bengaluru’s Mayo Hall Court Unit on Friday. He has been remanded to 14 days custody.

Murugan who robbed across South India, is now confessing his crime regarding the Lalitha Jewellery robbery to the Police officers. Meanwhile, many secrets about him which are getting surfaced due to the interrogation are creating furore. The gang of Murugan has made Rs.100 crores through robbery and police could seize only Rs.4.5 crores from them so far.

Murugan, as soon as robbing the money, spent it in a lavishing way to the female junior actresses of Telugu Cinema industry as per reports. He did it as an investment in the movie business according to reports. It was also reported that Murugan was affected by AIDS and got treatment to it in a hospital which is located in Chengalpet. He often disguised himself as a random Siva and Raja to get treated in various hospitals.

The robber even named a young tamil actress to the police officers and said that she had physical relationship with him. However, Police officers couldn’t able to believe the statements of Murugan as they are contradictory comparing to his previous statements.

According to Thanthi, One of a police officer has said that an young tamil actress’s name was surfaced during the interrogation. “But while seeing Murugan’s appearance, we couldn’t come to a conclusion on him having relationship with an actress. We also have a strong doubt whether those actresses he mentioned would stoop to his level for money. We will discover soon whom the actress is” said the Police.

Murugan was wanted in many cases in Bengaluru and had been arrested in 2015 by the police. Between 2010 and 2015, there were around 80 cases registered against him in Bengaluru and three cases in Cyberabad police station at the time.

Previous articleArun Vijay Happily Posted A Family Picture Without Vanitha !! Here’s How She Reacted To It !!
Next articleMeera Mithun Slammed Cheran & Kamal Haasan After All These Days !! WATCH !!